The Federal Reserve interest rate decision is likely to shake up the near-term outlook for the U.S. dollar as the central bank is widely expected to increase the benchmark interest rate to a fresh threshold of 2.25% to 2.50%.

Keep in mind, market participants may put increased emphasis on the Summary of Economic Projections (SEP) ahead of 2019 as Fed officials show a greater willingness to tolerate above-target inflation over the policy horizon, and a downward revision in the interest-rate dot-plot is likely to fuel the recent appreciation in EUR/USD as the central bank appears to be approaching the end of the hiking-cycle.

However, ongoing projections for a neutral fed fund rate of 2.75% to 3.00% would indicate Chairman Jerome Powell & Co. will continue to normalize monetary policy over the coming months despite the recent remarks from the Trump Administration, and a hawkish forward-guidance may ultimately drag on EUR/USD especially as the European Central Bank (ECB) remains in no rush to move away from its zero-interest rate policy (ZIRP). Sign up and join DailyFX Currency Analyst David Song LIVE for an opportunity to discuss potential trade setups.

As expected, the Federal Open Market Committee (FOMC) moved to the sidelines in November, with the central bank keeping the benchmark interest rate at its current threshold of 2.00% to 2.25%. Nevertheless, the policy statement suggests Chairman Powell & Co. will continue to normalize monetary policy over the coming months as ‘the Committee expects that further gradual increases in the target range for the federal funds rate will be consistent with sustained expansion of economic activity, strong labor market conditions, and inflation near the Committee's symmetric 2 percent objective over the medium term.’

The U.S. dollar gained ground following the hawkish forward-guidance for monetary policy, with EUR/USD struggling to hold above the 1.1400 handle as it closed the day at 1.1363. Review the DailyFX Advanced Guide for Trading the News to learn our 8 step strategy. 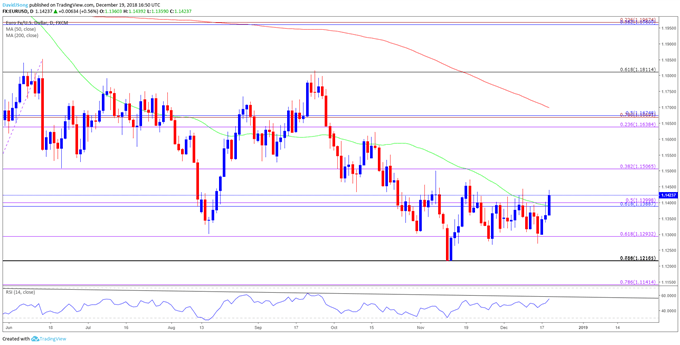