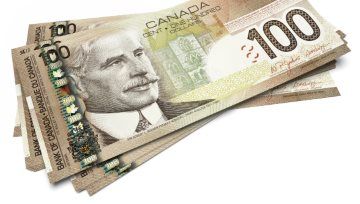 The Bank of Canada’s (BoC) last meeting for 2018 may do little to influence the near-term outlook for USD/CAD as the central bank is widely anticipated to keep the benchmark interest rate at 1.75%.

The BoC may revert back to a wait-and-see approach after delivering a 25bp rate-hike in October, and more of the same from the central bank may dampen the appeal of the Canadian dollar as the Governing Council pledges ‘to take into account how the economy is adjusting to higher interest rates, given the elevated level of household debt.’

In turn, the Canadian dollar may face a bearish reaction if the BoC merely attempt to buy time at the December meeting, with USD/CAD at risk of retracing the decline from earlier this week especially as the Federal Reserve is widely expected to implement a rate-hike later this month.

However, Governor Stephen Poloz & Co. may continue to prepare Canadian households and businesses for higher borrowing-costs as the ‘Governing Council agrees that the policy interest rate will need to rise to a neutral stance to achieve the inflation target,’ and a hawkish forward-guidance for monetary policy may boost the appeal of the Canadian dollar as the BoC sticks to its hiking-cycle. Sign up and join DailyFX Currency Analyst David Song LIVE for an opportunity to discuss potential trade setups!

The Bank of Canada (BoC) implemented a 25bp rate-hike in October to push the benchmark interest rate to 1.75% from 1.50% the month prior, and it seems as though the central bank will continue to normalize monetary policy as ‘the Bank’s core measures of inflation all remain around 2 per cent, consistent with an economy that is operating at capacity.’ The BoC struck a more upbeat tone as ‘the new US-Mexico-Canada Agreement (USMCA) will reduce trade policy uncertainty in North America, which has been an important curb on business confidence and investment,’ and Governor Stephen Poloz & Co. may continue to prepare Canadian households and businesses for higher borrowing-costs as the ‘Governing Council agrees that the policy interest rate will need to rise to a neutral stance to achieve the inflation target.’

The Canadian dollar gained ground following the hawkish rate-hike, with USD/CAD quickly pulling back ahead of the 1.3100 region to end the day at 1.3056. Review the DailyFX Advanced Guide for Trading the News to learn our 8 step strategy. 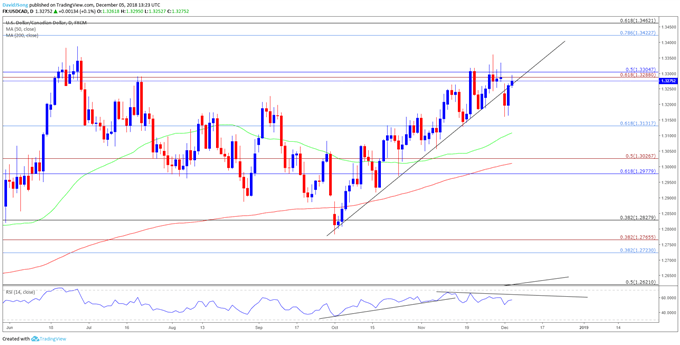