The Reserve Bank of New Zealand (RBNZ) interest rate decision may curb the recent advance in NZD/USD as the central bank is widely expected to keep the official cash rate (OCR) at the record-low of 1.75% in November.

It seems as though the RBNZ will stick to the current script at its last meeting for 2018 as officials pledge to ‘keep the OCR at an expansionary level for a considerable period,’ and Governor Adrian Orr & Co. may continue to strike a dovish forward-guidance in 2019 as ‘trade tensions remain in some major economies, increasing the risk that ongoing increases in trade barriers could undermine global growth.’

As a result, more of the same from the RBNZ may drag on the New Zealand dollar, but signs of strong job/wage growth may push the central bank to soften its dovish tone amid ‘early signs of core inflation rising towards the mid-point of the target.’ With that said, a material shift in monetary policy outlook may ultimately fuel the recent advance in NZD/USD as it boosts bets for an RBNZ rate-hike in 2019. Sign up and join DailyFX Currency Analyst David Song LIVE for an opportunity to discuss potential trade setups.

The Reserve Bank of New Zealand (RBNZ) kept the official cash rate (OCR) at the record-low of 1.75% in September and it seems as though the central bank is in no rush to alter the monetary policy outlook as officials ‘expect to keep the OCR at this level through 2019 and into 2020.’ It seems as though the RBNZ will keep the door open to further support the economy as ‘consumer price inflation remains below the 2 percent mid-point of our target,’ and the central bank may continue to strike a dovish tone next year ‘downside risks to the growth outlook remain.’

More of the same from the RBNZ sparked a mixed reaction in the New Zealand dollar, with NZD/USD quickly pulling back from the 0.6680 region to close the day at 0.6611. Learn more with the DailyFX Advanced Guide for Trading the News. 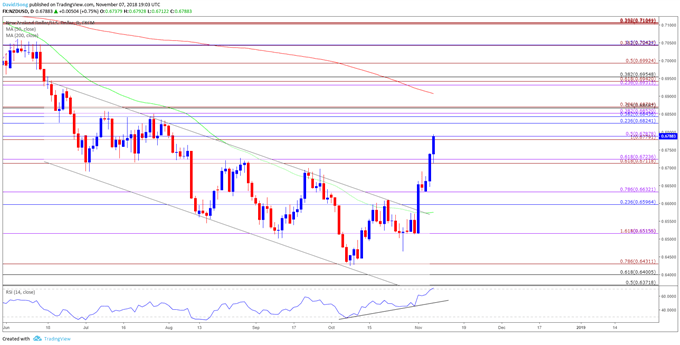