Updates to the ISM Manufacturing survey may rattle the U.S. dollar as the index is expected to narrow to 59.0 from 59.8 in September.

Another downtick in the business confidence survey may curb the appeal of the greenback as it dampens the outlook for growth, and mixed signals coming out of the economy may impede on the Federal Reserve’s hiking-cycle as U.S. firms attempt ‘to diversify the set of countries with which they trade--both imports and exports--as a result of uncertainty over tariff policy.’

In turn, the ongoing shift in U.S. trade policy may continue to drag on business sentiment, but an unexpected uptick in the ISM survey may undermine the recent rebound in EUR/USD as the Federal Open Market Committee (FOMC) appears to be on track to deliver another rate-hike in 2018. Sign up and join DailyFX Currency Analyst David Song LIVE for an opportunity to discuss potential trade setups.

Impact that the U.S. ISM Manufacturing has had on EUR/USD during the last release

The ISM Manufacturing survey weakened more-than-expected in September, with the index narrowing to 59.8 from 61.3 the month prior. A deeper look at the report showed the gauge for New Orders slipping to 61.8 from 65.1 in August, with the Prices Paid index also slipping to 66.9 from 72.1, while the Employment component widened to 58.8 from 58.5 during the same period.

The initial reaction to the mixed data prints was short-lived, with EUR/USD quickly falling back below the 1.1600 handle to end the day at 1.1578. Review the DailyFX Advanced Guide for Trading the News to learn our 8 step strategy. 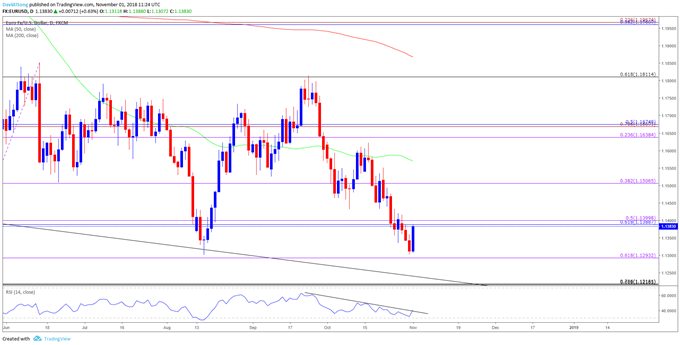