Updates to New Zealand’s Consumer Price Index (CPI) may fuel the recent rebound in NZD/USD as the headline reading for inflation is expected to widen to 1.7% from 1.5% per annum in the second-quarter of 2018.

Signs of stronger price growth may heighten the appeal of the New Zealand dollar as it puts pressure on the Reserve Bank of New Zealand (RBNZ) to lift the official cash rate (OCR) off of the record-low, and the central bank may start to change its tune at the next meeting on November 7 especially as ‘GDP growth in the June quarter was stronger than we had anticipated.’

However, a below-forecast print may rattle NZD/USD as it encourages the RBNZ to carry the wait-and-see approach into 2019, and Governor Adrian Orr & Co. may keep the door open to further support the economy as ‘downside risks to the growth outlook remain.’ Sign up and join DailyFX Currency Analyst David Song LIVE for an opportunity to discuss potential trade setups!

New Zealand’s Consumer Price Index (CPI) picked up during the three-months through June, with the headline reading climbing to 1.5% from 1.1% per annum in the first-quarter of 2018. A deeper look at the report showed the weakness was led by a 5.6% decline in the cost for fruits/vegetables, with prices for clothing also narrowing 1.2% from the previous year, while transportation costs increased another 2.0% on the back of higher energy prices.

NZD/USD bounced back from 0.6755 region despite the below-forecast print, with NZD/USD largely holding steady throughout the remainder of the day as the exchange rate closed at 0.6783. Learn more with the DailyFX Advanced Guide for Trading the News. 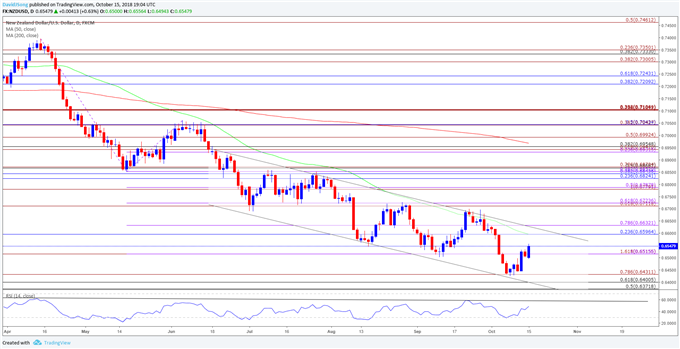