Updates to the U.S. Non-Farm Payrolls (NFP) report may fuel the recent weakness in EUR/USD as the world’s largest economy is anticipated to add another 185K jobs in September.

The Unemployment Rate is also expected to narrow to 3.8% from 3.9% per annum in August, and signs of a more robust labor market may encourage the Federal Reserve to deliver another rate-hike in 2018 as Chairman Jerome Powell notes that ‘the economy is strong, unemployment is near 50-year lows, and inflation is roughly at our 2 percent objective.’

In turn, the Fed officials may continue to prepare U.S. households and businesses for higher borrowing-costs as ‘the Committee expects that further gradual increases in the target range for the federal funds rate will be consistent with sustained expansion of economic activity, strong labor market conditions, and inflation near the Committee's symmetric 2 percent objective over the medium term,’ and a set of positive developments may ultimately heighten the appeal of the dollar as market participants gear up for higher U.S. interest rates.

However, Average Hourly Earnings are projected to slow to 2.8% from 2.9% per annum during the same period, and a batch of mixed data prints may rattle the dollar as it undermines speculation for four Fed rate-hikes in 2018. Sign up and join DailyFX Currency Analyst David Song LIVE for an opportunity to discuss potential trade setups!

U.S. Non-Farm Payrolls (NFP) increased 201K in August following a revised 147K expansion the month prior, while the jobless rate held steady at 3.9% per annum during the same period amid projections for a 3.8% print. Nevertheless, a deeper look at the report showed the Labor Force Participation Rate narrowing to 62.7% from 62.9% July, while Average Hourly Earnings unexpectedly climbed to 2.9% from 2.7% during the same period.

The greenback gained ground following the ongoing improvement in the U.S. labor market, with EUR/USD slipping below the 1.1600 handle to end the day at 1.1552. Review the DailyFX Advanced Guide for Trading the News to learn our 8 step strategy. 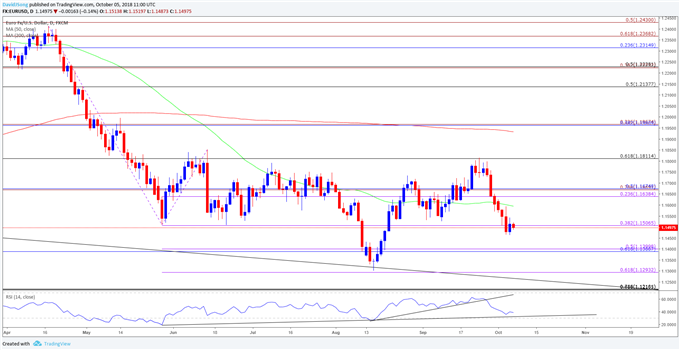