Updates to New Zealand’s Retail Sales report may fuel the recent recovery in NZD/USD as household spending is expected to increase 0.3% versus the 0.1% during the first three-months of 2018.

Signs of stronger consumption may heighten the appeal of the New Zealand dollar as it instills an improved outlook for growth and inflation, and the Reserve Bank of New Zealand (RBNZ) may start to drop its cautious tone over the coming months as ‘employment is roughly around its maximum sustainable level.’

However, another lackluster development may rattle the rebound in NZD/USD as it encourages the RBNZ to keep the official cash rate (OCR) at the record-low, and Governor Adrian Orr & Co. may stick to the current script at the next meeting on September 27 as officials warn that ‘the recent moderation in growth could last longer.’ Interested in having a broader discussion on current market themes? Sign up and join DailyFX Currency Analyst David Song LIVE for an opportunity to discuss potential trade setups!

The New Zealand dollar struggled to hold its ground following the below-forecast print, with NZD/USD dipping below the 0.6900 handle, but the reaction was short-lived as the exchange rate closed the day at 0.6945. Learn more with the DailyFX Advanced Guide for Trading the News. 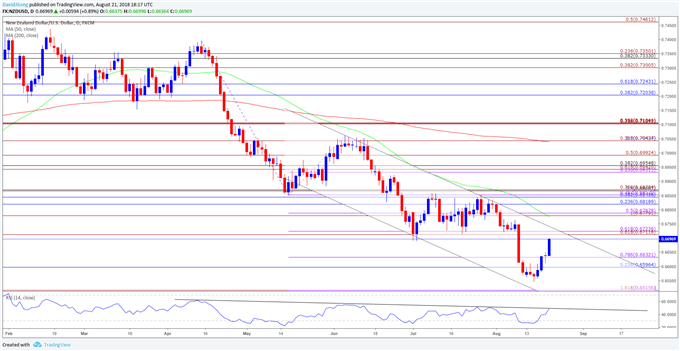