The Federal Reserve interest rate decision may spark a limited reaction as the central bank is widely expected to keep the benchmark rate on hold, but a shift in the forward-guidance for monetary policy may alter the near-term outlook for EUR/USD as Fed officials stick to the hiking-cycle.

Fresh comments from Fed officials may heighten the appeal of the U.S. dollar as the central bank appears to be on track to further normalize monetary policy, and Chairman Jerome Powell & Co. may ultimately prepare U.S. households and businesses for an imminent rate-hike as ‘the FOMC believes that--for now--the best way forward is to keep gradually raising the federal funds rate.’

As a result, a batch of hawkish Fed rhetoric may weigh on EUR/USD, but more of the same from the central bank may produce headwinds for the U.S. dollar as it dampens bets for four Fed rate-hikes in 2018.Sign up and joinDailyFX Chief Strategist John Kicklighter LIVE to cover the FOMC interest rate decision.

As expected, the Federal Open Market Committee (FOMC) delivered a 25bp rate-hike at the quarterly meeting in June, with the central bank increasing the benchmark interest to a fresh target range of 1.75% to 2.00% as ‘recent data suggest that growth of household spending has picked up, while business fixed investment has continued to grow strongly.’ The fresh comments suggest the Fed will continue to alter the forward-guidance while normalize monetary policy in 2018 as the ‘Committee expects that further gradual increases in the target range for the federal funds rate will be consistent with sustained expansion of economic activity, strong labor market conditions, and inflation near the Committee's symmetric 2 percent objective over the medium term.’

The initial decline in EUR/USD was short-lived, with the exchange rate bouncing back from a low of 1.1725 to close the day at 1.1791. Review the DailyFX Advanced Guide for Trading the News to learn our 8 step strategy. 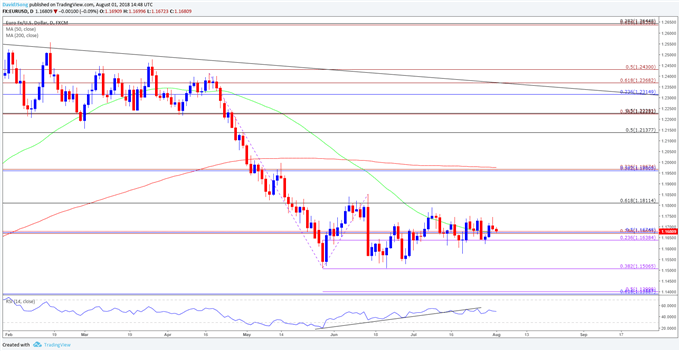 For more in-depth analysis, check out the Q3 Forecast for EUR/USD