Australia’s Employment report may fuel the recent rebound in AUD/USD as the economy is expected to add another 16.5K jobs in June, and signs of a stronger labor market may encourage the Reserve Bank of Australia (RBA) to alter the forward guidance for monetary policy as ‘strong growth in employment has been accompanied by a significant rise in labour force participation.’

A batch of positive developments may push the RBA to drop its cautious tone as ‘recent data on the Australian economy continue to be consistent with the Bank's central forecast for GDP growth to average a bit above 3 per cent in 2018 and 2019,’ and Governor Philip Lowe & Co. may start to show a greater willingness to lift the official cash rate off of the record-low as ‘other forward-looking indicators continue to point to solid growth in employment.’

However, a below-forecast print for Australia employment may produce headwinds for the Australian dollar as it saps bets for an RBA rate-hike in 2018, and the central bank may stick to the current script at the next meeting on August 7 as ‘household income has been growing slowly and debt levels are high.’ Sign up and join DailyFX Junior Currency Analyst Daniel Dubrovsky LIVE to cover the updates to Australia’s employment report.

Australia added 12.0K jobs in May following a 18.3K expansion the month prior, while the Unemployment Rate narrowed to 5.4% per annum from 5.6% during the same period as the Participation rate unexpectedly slipped to 65.5% from 65.6% in April. A deeper look at the report showed full-time employment contracting 20.6K, which was offset by a 32.6K rise in part-time positions.

The Australian dollar struggled to hold its ground following the mixed figures, with AUD/USD trading lower throughout the day to close at 0.7478. Learn more with the DailyFX Advanced Guide for Trading the News. 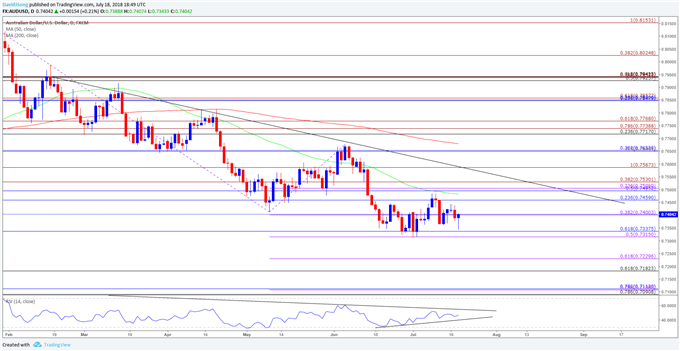