A 22.0K rebound in Canada Employment may trigger a pullback in USD/CAD as it puts pressure on the Bank of Canada (BoC) to implement higher borrowing-costs sooner rather than later.

A positive development is likely to boost the appeal of the Canadian dollar as it instills an improved outlook for growth and inflation, and the BoC may show a greater willingness to further normalize monetary policy in the second-half of 2018 as ‘activity in the first quarter appears to have been a little stronger than projected.’ The recent shift in central bank rhetoric suggests the BoC will continue to adjust monetary policy as ‘higher interest rates will be warranted to keep inflation near target,’ and USD/CAD stands at risk of facing a larger correction over the days ahead amid the string of failed attempts to test the March-high (1.3125).

With that said, the Canadian dollar may trade on a firmer footing ahead of the next BoC meeting on July 11, but another unexpected decline in employment may push USD/CAD back towards the monthly-high 1.3067) as it saps bets for an imminent rate-hike.

Canada unexpectedly shed 1.1K jobs in April after adding 32.3K positions the month prior, while the jobless rate held steady at an annualized 5.8% for the third consecutive month. A deeper look at the report showed 30.0K decline in part-time positions overshadow a 28.8K rise in full-time employment, with the ongoing improvement in the labor market dynamics like to put pressure on the Bank of Canada (BoC) to further normalize monetary policy in 2018 as it encourages an improved outlook for growth and inflation.

The below-forecast print weighed on the Canadian dollar, with USD/CAD climbing above the 1.2750 region to end the day at 1.2792. Review the DailyFX Advanced Guide for Trading the News to learn our 8 step strategy. 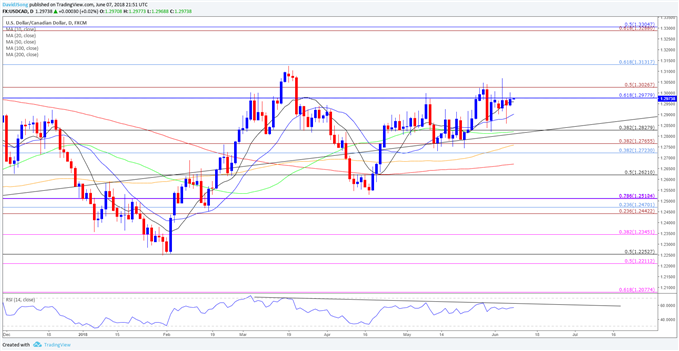