The Reserve Bank of Australia (RBA) rate decision may generate another limited reaction as the central bank is widely expected to keep the official cash rate at the record-low, but a material change in the forward-guidance may fuel the recent advance in AUD/USD if the central bank shows a greater willingness to normalize monetary policy.

Like the Bank of Canada (BoC), the RBA may start to change its tune as ‘members agreed that it was more likely that the next move in the cash rate would be up, rather than down.’ Even though Governor Philip Lowe and Co. remain in no rush to implement higher borrowing-costs, the central bank may come under increased pressures to abandon its accommodative stance especially as the Organisation for Economic Co-operation and Development (OECD) anticipates the RBA ‘to start gradually tightening towards the end of 2018, when the pick-up in wages and prices gathers pace.’

In turn, a batch of hawkish rhetoric may generate a bullish reaction in AUD/USD, but more of the same from Governor Lowe & Co. may undermine the recent advance in the Australian dollar as market participants scale back bets for an RBA rate-hike in 2018. Sign up and join DailyFX Currency Analyst David Song LIVE for a broader discussion on current themes and potential trade setups!

As expected, the Reserve Bank of Australia (RBA) stuck to the sidelines in May, with the central bank keeping the cash rate at the record-low of 1.50% as ‘holding the stance of monetary policy unchanged at this meeting would be consistent with sustainable growth in the economy and achieving the inflation target over time.’ The remarks suggest that Governor Lowe & Co. is in no rush to normalize monetary policy as ‘inflation remains low,’ and it sees as though the central bank retain a wait-and-see approach for the foreseeable future as ‘inflation is likely to remain low for some time, reflecting low growth in labour costs and strong competition in retailing.’

In turn, the RBA meeting sparked a limited reaction in AUD/USD, but the pair struggled to hold its ground throughout the pair as it closed at 0.7490. Learn more with the DailyFX Advanced Guide for Trading the News. 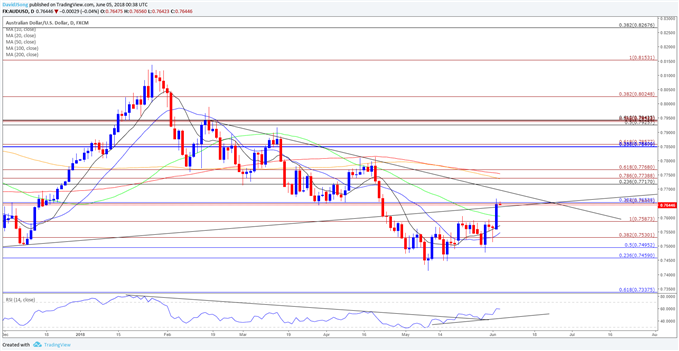