Updates to Australia’s Gross Domestic Product (GDP) report may spark a bullish reaction in AUD/USD as the growth rate is expected to pick up to an annualized 2.7% from 2.4% during the last three-months of 2017.

Even though the Reserve Bank of Australia (RBA) keeps the cash rate at the record-low in June, signs of stronger growth may encourage Governor Philip Lowe and Co. to gradually alter the monetary policy outlook over the coming months as ‘members agreed that it was more likely that the next move in the cash rate would be up, rather than down.’

As a result, a positive development may heighten the appeal of the Australian dollar as it puts pressure on the RBA to raise the official cash rate (OCR) off of the record-low, but a below-forecast GDP print may fuel the recent pullback in the exchange rate as market participants scale back bets for a rate-hike in 2018. Sign up and join DailyFX Currency Analyst David Song LIVE for a broader discussion on current themes and potential trade setups!

Economic activity in Australia slowed more-than-expected during the last four-months of 2017, with the growth rate narrowing to an annualized 2.4% from a revised 2.9% in the third-quarter. A deeper look at the report showed household consumption increasing 0.6%in the fourth quarter, with government spending climbing 0.3% during the same period, while private investments narrowed 0.4% after rising 1.0% in the three months through September.

Despite the below-forecast print, the Australian dollar gained ground throughout the day, with the pair closing at 0.7823. Learn more with the DailyFX Advanced Guide for Trading the News. 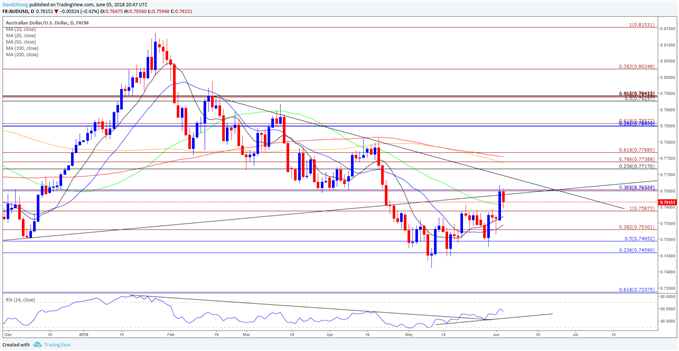