The Federal Open Market Committee (FOMC) interest rate decision may trigger a bearish reaction in the U.S. dollar as the central bank is widely expected to retain the current policy in May.

More of the same from the FOMC is likely to dampen the appeal of the greenback as it saps bets for four rate-hikes in 2018, and the Chairman Jerome Powell and Co. may largely emphasize that ‘the actual path of the federal funds rate will depend on the economic outlook as informed by incoming data’ amid the ongoing slack in the real economy. In turn, the dollar may ultimately face a bearish scenario, with EUR/USD at risk of paring the decline from the previous month if the central bank merely sticks to the current script.

However, the FOMC may sound more hawkish ahead of its next quarter meeting in June as recent data prints point to above-target inflation, and fresh remarks from central bank may heighten the appeal of the greenback if the committee shows a greater willingness to extend the hiking-cycle. Sign up and join DailyFX Chief Strategist John Kicklighter LIVE to cover the FOMC interest rate decision.

The Federal Open Market Committee (FOMC) delivered a 25bp rate-hike at Chairman Powell’s first meeting, with the central bank raising the benchmark interest rate to a fresh threshold of 1.50% to 1.75% in March.

It seems as though the Fed will continue to implement higher borrowing-costs over the coming months as ‘the Committee expects that economic conditions will evolve in a manner that will warrant further gradual increases in the federal funds rate,’ but the central bank appears to in no rush to extend the hiking-cycle as officials continue to project a terminal Fed Funds rate of 2.75% to 3.00%.

The U.S. dollar struggled to hold its ground following the dovish rate-hike, with EUR/USD climbing above the 1.2300 handle to end the day at 1.2338. 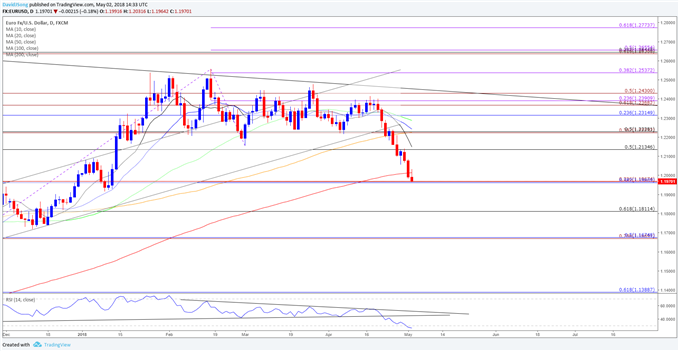