Another uptick in Canada’s Consumer Price Index (CPI) may derail the recent rebound in USD/CAD as it puts pressure on the Bank of Canada (BoC) to implement higher borrowing-costs sooner rather than later.

Recent comments from the BoC suggests the central bank remains in no rush to raise the benchmark interest rate as officials argue ‘some monetary policy accommodation will still be needed to keep inflation on target,’ but signs of heightening price pressures may push Governor Stephen Poloz and Co. to alter the outlook for monetary policy as ‘Some progress has been made on the key issues being watched closely by Governing Council, particularly the dynamics of inflation and wage growth.’

As a result, updates to the CPI may trigger a bullish reaction in the Canadian dollar should the report boost bets for another BoC rate-hike in 2018. At the same time, a below-forecast inflation report may ultimately fuel the recent rebound in USD/CAD as it dampens bets for higher interest rates in Canada.

The headline reading for Canada inflation picked up more-than-expected in February, with the Consumer Price Index (CPI) climbing to an annualized 2.2% from 1.7% the month prior to mark the fastest pace of growth since 2014. A deeper look at the report showed nine of the eleven components highlighting stronger inflation, with prices for clothing/footwear marking the first rise in four months, while energy prices narrowed 0.3% during the same period.

The Canadian dollar gained ground following the stronger-than-expected CPI print, but the reaction unraveled throughout the North American trade, with USD/CAD ending the day at 1.2894. New to the currency market? Want a better understanding of the different approaches for trading? Start by downloading and reviewing the FREE DailyFX Beginners guide. 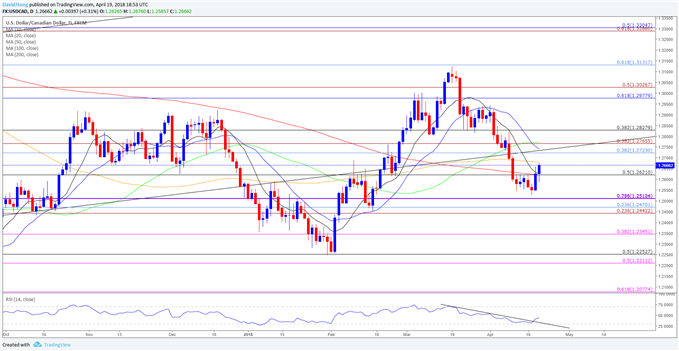