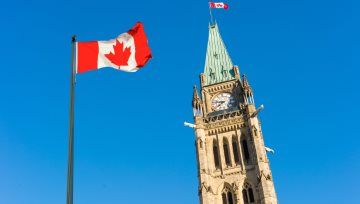 - Bank of Canada (BoC) to Hold Benchmark Interest Rate at 1.25% in April. Will Governor Stephen Poloz and Co. Stick to the Current Script Amid Above-Target Inflation?

More of the same from the Bank of Canada (BoC) may curb the recent decline in USD/CAD as market participants scale back bets for an imminent rate-hike.

The BoC may merely attempt to buy more time as ‘trade policy developments are an important and growing source of uncertainty for the global and Canadian outlooks,’ and the central bank may offer little guidance on the timing of the next rate-hike amid ‘heightened uncertainty about future US trade policies, changes in inflation dynamics, wage behaviour and the impact of interest rates on the economy, given high levels of household debt.’

However,signs of above-target inflation paired with the ongoing improvement in labor market dynamics may push Governor Stephen Poloz and Co. to prepare Canadian households and businesses for higher borrowing-costs as ‘the economic outlook is expected to warrant higher interest rates over time.’ A material shift in the monetary policy outlook may fuel the decline from the April-high (1.2944) as market participants prepare for higher interest rates.

As expected, the Bank of Canada (BoC) kept the benchmark interest rate at 1.25% following the dovish rate-hike from earlier this year, with the central bank largely endorsing a wait-and-see approach for monetary policy as ‘GDP growth was slower than expected, largely due to higher imports, while exports made only a partial recovery from their third-quarter decline.’

The fresh comments suggest the BoC remains in no rush to deliver another rate-hike as ‘some continued monetary policy accommodation will likely be needed to keep the economy operating close to potential and inflation on target,’ and the central bank may stick to the sidelines for the foreseeable future as ‘wage growth has firmed, but remains lower than would be typical in an economy with no labour market slack.’

The Canadian dollar struggled to hold its ground following the rate decision, but the reaction was short-lived, with USD/CAD pulling back to end the day at 1.2911. Want More Insight? Sign up & join DailyFX Currency Analyst David Song LIVE to cover the BoC rate decision. 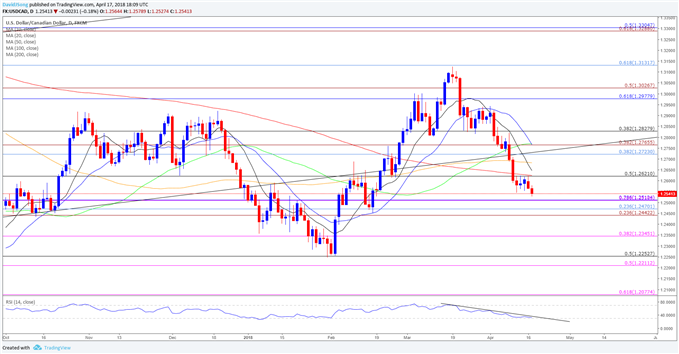