The Bank of Canada (BoC) meeting may spark a limited reaction as the central bank is widely expected to keep the benchmark interest rates on hold, and Governor Stephen Poloz and Co. may merely attempt to buy more time as ‘as uncertainty about the future of NAFTA is weighing increasingly on the outlook.’

The BoC may sound more cautious this time around as U.S. President Donald Trump unveils a 25% tariff on imported steel and a 10% tariff on imported aluminum, and the accompanying statement may trigger a bearish reaction in the Canadian dollar if the central bank shows a greater willingness to carry the current policy into the second-half of 2018.

Keep in mind, the BoC is likely to reiterate that ‘the economic outlook is expected to warrant higher interest rates over time’ as the economy approaches full capacity, and the central bank may have little choice but to prepare Canadian households and businesses for higher borrowing-costs especially as ‘growth is expected to remain above potential through the first quarter of 2018.’ As a result, an unexpected batch of hawkish rhetoric may fuel a more meaningful pullback in USD/CAD as it fuels bets for an imminent BoC rate-hike.

The Bank of Canada (BoC) increased the benchmark interest rate to 1.25% in January as ‘recent data have been strong, inflation is close to target, and the economy is operating roughly at capacity.’ However, unlike 2017, it seems as though the central bank will refrain from delivering a series of rate-hikes as ‘some continued monetary policy accommodation will likely be needed to keep the economy operating close to potential and inflation on target.’

The Canadian dollar struggled to hold its ground following the dovish rate-hike, but the reaction was short-lived, with USD/CAD pulling back to end the day at 1.2435. Are you looking to improve your trading approach? Review the ‘Traits of a Successful Trader’ series on how to effectively use leverage along with other best practices that any trader can follow. 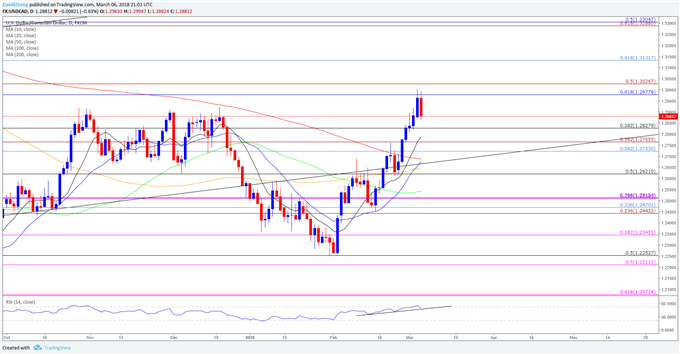