- Reserve Bank of Australia (RBA) to Keep Cash Rate at Record-Low of 1.50%. Will Governor Philip Lowe and Co. Continue to Endorse a Wait-and-See Approach for Monetary Policy?

The Reserve Bank of Australia (RBA) interest rate decision may generate a limited reaction as the central bank is widely expected to keep the cash rate on hold, but a batch of dovish comments may weigh on AUD/USD should the central bank tame bets for an imminent rate-hike.

Governor Philip Lowe & Co. may merely try to buy more time as ‘further progress in reducing unemployment and having inflation return to target is expected,’ and the central bank may continue to endorse a wait-and-see approach for monetary policy as ‘the Bank's central forecast for the Australian economy is for GDP growth to pick up, to average a bit above 3 per cent over the next couple of years.’ As a result, AUD/USD may continue to consolidate over the coming days, with the pair at risk for a near-term rebound as it snaps the series of lower highs and lows from the previous week.

However, the RBA may continue to curb expectations for higher borrowing-costs as ‘inflation is low, with both CPI and underlying inflation running a little below 2 per cent,’ and the Australia dollar may face a more bearish fate should the central bank show a greater willingness to retain the record-low cash rate throughout 2018.

The Reserve Bank of Australia (RBA) left the cash rate unchanged at its first meeting for 2018, and it seems as though the central bank will preserve the record-low rate throughout the foreseeable future as ‘the low level of interest rates is continuing to support the Australian economy.’ The remarks suggest Governor Philip Lowe and Co. are in no rush to implement higher borrowing-costs as ‘household incomes are growing slowly and debt levels are high,’ and the central bank may continue to promote a wait-and-see approach for monetary policy as ‘inflation is likely to remain low for some time.’

The cautious remarks dragged on the Australian dollar, with AUD/USD dipping below the 0.7850 region, but the reaction was short-lived as the pair ended the day at 0.7905. Want More Insight? Sign up and join DailyFX Currency Strategist Ilya Spivak LIVE to cover the RBA rate decision. 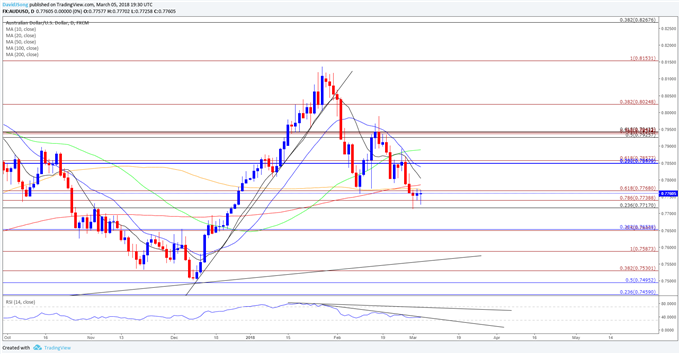 New to trading? Review the ‘Traits of a Successful Trader’ series on how to effectively use leverage along with other best practices that any trader can follow.