- Core Rate of Inflation to Uptick for First Time Since August 2017.

Updates to the U.K. Consumer Price Index (CPI) may spark a mixed reaction in GBP/USD as the headline reading for inflation is expected to downtick for the second consecutive month in January, while the core rate of inflation is projected to increase to an annualized 2.6% from 2.5% in December.

Signs of easing price pressures may fuel the recent decline in GBP/USD as it encourage the Bank of England (BoE) to keep the benchmark interest rate on hold, and the central bank may merely attempt to buy more time at the next meeting on March 22 as ‘any future increases in Bank Rate are expected to be at a gradual pace and to a limited extent.’ However, figures pointing to sticky price growth may push Governor Mark Caney and Co. to prepare U.K. households and businesses for higher borrowing-costs as ‘the Committee judges that, were the economy to evolve broadly in line with the February Inflation Report projections, monetary policy would need to be tightened somewhat earlier and by a somewhat greater extent over the forecast period than anticipated at the time of the November Report, in order to return inflation sustainably to the target.’

In turn, an above-forecast CPI print may ultimately spark a bullish reaction in the British Pound as it boosts bets for an imminent BoE rate-hike. Want more insight? Sign up & join DailyFX Market Analyst Nick Cawley LIVE to cover the U.K. CPI report.

Impact that U.K. CPI report has had on GBP/USD during the previous release

The U.K. Consumer Price Index (CPI) narrowed to an annualized 3.0% from 3.1% in November, while the core rate of inflation slipped to 2.5% from 2.7% during the same period to mark the slowest pace of growth since July. A deeper look at the report showed cost for telecommunications falling 1.3% in December to lead the decline, with prices for clothing & footwear narrowing 0.9%, while transportation costs increased 2.2% during the same period.

The British Pound lost ground following the mixed data prints, with GBP/USD slipping below the 1.3750 region, but the move was short-lived as the pair ended the day at 1.3791. New to trading? Review the ‘Traits of a Successful Trader’ series on how to effectively use leverage along with other best practices that any trader can follow. 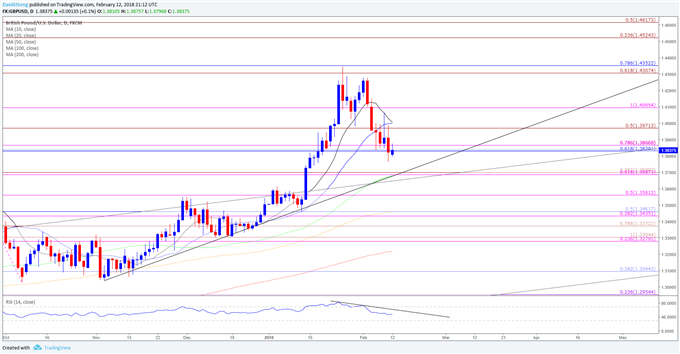