- Canada Employment to Rise 10.0K in January After Three Months of Above-Forecast Prints.

Canada is expected to add 10.0K jobs in January, but another above-forecast print may tame the near-term advance in USD/CAD as it puts pressure on the Bank of Canada (BoC) to further normalize monetary policy over the coming months.

After implementing a dovish rate-hike at its first meeting for 2018, signs of easing job growth may encourage the BoC to endorse a wait-and-see approach at the next rate decision in March as ‘some continued monetary policy accommodation will likely be needed to keep the economy operating close to potential and inflation on target.’ In turn, a lackluster employment print may keep USD/CAD afloat as it dampens the outlook for growth and inflation.

However, Governor Stephen Poloz and Co. may continue to implement higher borrowing-costs over the coming months as ‘recent data show that labour market slack is being absorbed more quickly than anticipated,’ and another batch of positive developments may curb the near-term advance in USD/CAD as it boosts bets for an imminent BoC rate-hike.

Employment in Canada jumped 78.6K in December following a revised 81.2K expansion the month prior, while the jobless rate unexpectedly narrowed to an annualized 5.7% from 5.9% during the same period to mark the lowest reading since the data series began in 1976. A deeper look at the report showed the above-forecast print was led by a 54.9K jump in part-time jobs, with full-time positions increasing 23.7K after climbing a revised 35.5K in November.

The Canadian dollar gained ground following the positive development, with USD/CAD tumbling below the 1.2500 handle to end the day at 1.2411. Thinking of trading Canada’s employment report but don’t have a strategy? Download & review the DailyFX Advanced Guide for Trading the News to learn our 8 step strategy. 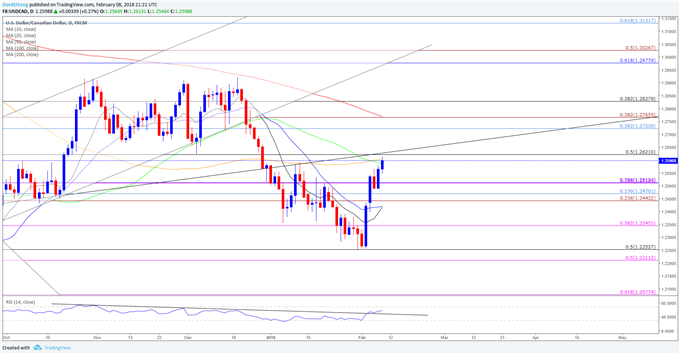