The Bank of England’s (BoE) quarterly interest rate decision may impact the near-term outlook for GBP/USD should the central bank show a greater willingness to further normalize monetary policy over the coming months.

Even though the BoE is expected to stay on hold, the central bank is likely to reiterate that ‘further modest increases in Bank Rate would be warranted over the next few years, in order to return inflation sustainably to the target.’ As a result, the fresh updates coming out of the BoE may curb the recent weakness in the pound-dollar exchange rate if the central bank prepares U.K. households and businesses for an imminent rate-hike.

However, the MPC will follow a similar path to 2017 as officials warn ‘any future increases in Bank Rate were expected to be at a gradual pace and to a limited extent,’ and more of the same from Governor Mark Carney and Co. may fuel the recent decline in GBP/USD as the central bank appears to be on course to implement one rate-hike per year. Want more insight? Sign up & join DailyFX Market Analyst Nick Cawley LIVE to cover the BoE rate decision.

The Bank of England (BoE) voted unanimously to retain the current policy after delivering a 25bp hike in November, and it seems as though the central bank remains in no rush to implement higher borrowing-costs as officials ‘continued to judge that inflation was likely to be close to its peak, and would decline towards the 2% target in the medium term.’ It seems as though the Monetary Policy (MPC) will stick to the sidelines for the foreseeable future as ‘developments regarding the United Kingdom’s withdrawal from the European Union – and in particular the reaction of households, businesses and asset prices to them – had remained the most significant influence on, and source of uncertainty about, the economic outlook.’

The British Pound struggled to hold its ground as the BoE endorsed a wait-and-see approach for monetary policy, with GBP/USD pulling back from the 1.3450 region to end the day at 1.3429. New to trading? Review the ‘Traits of a Successful Trader’ series on how to effectively use leverage along with other best practices that any trader can follow. 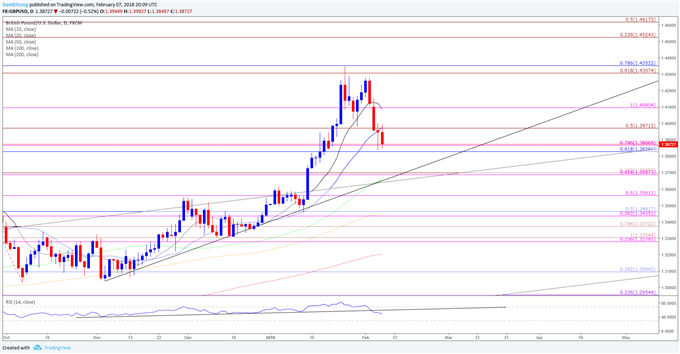