- Average Hourly Earnings to. Climb to Annualized 2.6% from 2.5% in December.

A 180K expansion in U.S. Non-Farm Payrolls (NFP) paired with an uptick in Average Hourly Earnings may spark a bearish reaction in EUR/USD as it encourages the Federal Open Market Committee (FOMC) to further normalize monetary policy over the coming months.

The FOMC may follow a similar path to 2017 as Fed officials forecast three rate-hikes for this year, and a batch of positive developments may push the central bank to implement a March rate-hike as ‘the Committee expects that economic conditions will evolve in a manner that will warrant further gradual increases in the federal funds rate.’

However, a set of mixed data prints may drag on the greenback as it dampens the outlook for growth and inflation, with the U.S. dollar at risk of facing additional headwinds over the near-term as market participants scale back bets for an imminent Fed rate-hike. New to trading? Review the ‘Traits of a Successful Trader’ series on how to effectively use leverage along with other best practices that any trader can follow.

U.S. Non-Farm Payrolls (NFP) increased 148K in December after climbing a revised 252K the month prior, while the unemployment rate held steady at an annualized 4.1% for the third consecutive month. Average Hourly Earnings were largely in-line with market expectations as the figure showed wage growth increasing an annualized 2.5% in December, while a separate report showed the Trade Balance deficit widening to $50.5B in November, from a revised $48.9B the month prior.

The initial market reaction was short-lived, with EUR/USD consolidating throughout the day to close at 1.2014. Want more insight? Sign up and join DailyFX Strategist Michael Boutros & David Song LIVE to cover the U.S. NFP report. 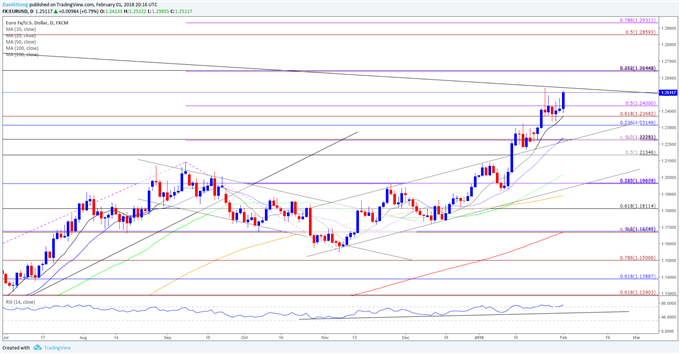 For additional resources, download and review the FREE DailyFX Advanced Guide for Trading the News to learn our 8 step strategy.