- Bank of Canada (BoC) to Increase Benchmark Interest Rate to 1.25%.

The Bank of Canada (BoC) is expected to increase the benchmark interest rate at its first meeting in 2018, but a dovish rate-hike may undermine the recent decline in USD/CAD as market participants scale back bets for higher borrowing-costs.

Unlike 2017, Governor Stephen Poloz and Co. may quickly tame expectations for a series of rate-hikes as ‘the global outlook remains subject to considerable uncertainty, notably about geopolitical developments and trade policies.’ As a result, a less-hawkish forward guidance may ultimately trigger a bearish reaction in the Canadian dollar as market participants push out bets for next BoC rate-hike.

However, the central bank may adopt a more aggressive approach to normalize monetary policy as ‘inflation has been slightly higher than anticipated and will continue to be boosted in the short term by temporary factors,’ and the dollar-loonie exchange rate may exhibit a more bearish behavior over the near-term should the BoC show a greater willingness to deliver another rate-hike over the coming months.

The Bank of Canada (BoC) continued to endorse a wait-and-see approach at its last meeting in 2017, with Governor Stephen Poloz and Co. keeping the benchmark interest rate at 1.00% as ‘recent Canadian data are in line with October’s outlook, which was for growth to moderate while remaining above potential in the second half of 2017.’

The fresh remarks suggest the BoC is no rush to further normalize monetary policy as ‘Governing Council judges that the current stance of monetary policy remains appropriate,’ but the central bank may continue to prepare Canadian households and businesses for a less accommodative stance as officials warn ‘higher interest rates will likely be required over time.’

The Canadian dollar struggled to hold its ground following the rate decision, with USD/CAD rising above the 1.2700 region to end the day at 1.2788. Thinking of trading the BoC meeting but don’t have a strategy? Download & review the DailyFX Advanced Guide for Trading the News to learn our 8 step strategy. 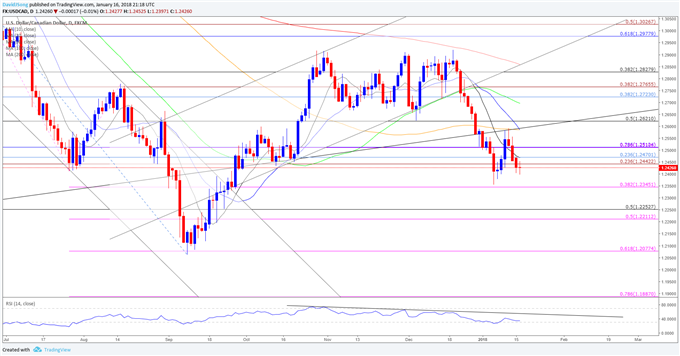