New Zealand’s Gross Domestic Product (GDP) report may spark a bearish reaction in NZD/USD as the growth rate is anticipated to slow to an annualized 2.4% from 2.5% in the second quarter of 2017, with the pair at risk of giving back the rebound from earlier this month as it encourages the Reserve Bank of New Zealand (RBNZ) to keep the cash rate at the record-low.

Even though Adrian Orr is scheduled to take the helm in March 2018, signs of tepid growth may sap bets for an imminent change in the monetary policy outlook as ‘underlying inflation remains subdued.’ Keep in mind, Prime Minister Jacinda Ardern’s initiative to ‘review and revise’ the RBNZ’s mandate will be a key theme to watch in 2018, with the threat of a major overhaul likely to drag on the local currency as it limits the central bank’s scope to alter the course for policy.

Nevertheless, a positive development may trigger a bullish reaction in NZD/USD as it puts pressure on the RBNZ to move away from its easing-cycle, but the broader outlook for the kiwi-dollar exchange rate remains tilted to the downside as both price and the Relative Strength Index (RSI) preserve the bearish trends carried over from the summer months.

New Zealand’s 2Q Gross Domestic Product (GDP) report showed the economy expanding another 2.5% per annum to mark the slowest pace of growth since 2015, with the economic activity increasing 0.8% during the three months through June. The lackluster recovery is likely to keep the Reserve Bank of New Zealand (RBNZ) on the sidelines as officials reiterate ‘monetary policy will remain accommodative for a considerable period,’ and acting Governor Grant Spencer appears to be on course to carry the record-low cash rate into 2018 as ‘headline inflation is likely to decline in coming quarters as the effects of higher fuel and food prices dissipate.’ 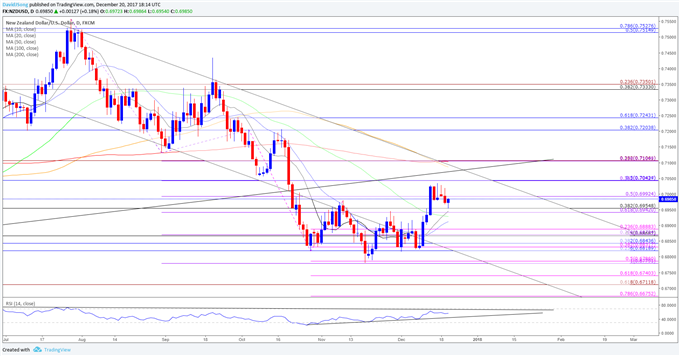