- Will Governor Carney & Co. Stay on Course to Implement One Rate-Hike Per Year?

The Bank of England (BoE) interest rate decision may generate a limited reaction as the central bank is expected to carry the current policy into 2018, but fresh remarks from Governor Mark Carney and Co. may heighten the appeal of the British Pound if the committee prepares U.K. households and businesses for higher borrowing-costs.

Even though the BoE remains in no rush to normalize policy, the Monetary Policy Committee (MPC) appears to be on track to deliver one rate-hike per year as the ‘most recent assessment of the outlook for inflation and activity, contained in the November Inflation Report, was conditioned on a market path that implied two additional 25 basis point increases in Bank Rate over the three-year forecast period.’ In turn, a batch of hawkish remarks may spark a bullish reaction in the British Pound, but more of the same from the MPC may generate a muted response as market participants gauge the timing of the next rate-hike.

The Bank of England (BoE) voted 7 – 2 to increase the benchmark interest rate for the first time since 2007 as ‘the steady erosion of slack has reduced the degree to which it is appropriate for the MPC to accommodate an extended period of inflation above the target.’ However, the BoE appeared to be taming expectations for a series of rate-hikes as ‘inflation is expected to fall back over the next year,’ and Governor Mark Carney and Co. may largely endorse a wait-and-see approach for 2018 as ‘There remain considerable risks to the outlook, which include the response of households, businesses and financial markets to developments related to the process of EU withdrawal.’

The British Pound struggled to hold its ground following the dovish rate-hike, with GBP/USD slipping below the 1.3100 handle to end the day at 1.3058. Interested in trading the BoE rate decision but don’t have a plan? Download and review the DailyFX Advanced Guide for Trading the News for FREE to learn our 8 step strategy. 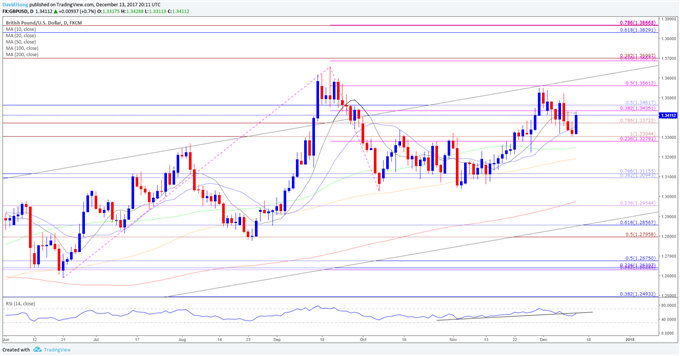