- Canada Employment to Increase Another 10.0K in November.

Canada’s 3Q Gross Domestic Product (GDP) report may fuel the near-term recovery in USD/CAD as the growth rate is expected to slow to an annualized 1.6% after expanding 4.5% during the three-months through June.

Even though Canada Employment is anticipated to add another 10.0K jobs in November, a marked slowdown in the growth rate may impact the near-term outlook for the dollar-loonie exchange rate as it encourages the Bank of Canada (BoC) to endorse a wait-and-see approach for the foreseeable future. After delivering two rate-hikes in 2017, Governor Stephen Poloz and Co. appear to be in no rush to implement higher borrowing-costs as ‘growth is expected to moderate to a more sustainable pace in the second half of 2017 and remain close to potential over the next two years.’

In turn, the BoC may stick to the sidelines at the next policy meeting on December 6, but the central bank may continue to alter the monetary policy outlook in 2018 as ‘less monetary policy stimulus will likely be required over time.’

Canada’s 2Q Gross Domestic Product (GDP) report showed the economy expanding an annualized 4.5% to mark the fastest pace of growth since 2011, with the above-forecast print led by a 4.6% rise in household consumption. Signs of stronger-than-expected growth may encourage the Bank of Canada (BoC) to further normalize monetary as the central bank lifts the benchmark interest rate off of the record-low in 2017, and Governor Stephen Poloz and Co. may continue to change their tune over the coming months amid the positive developments coming out of the region.

The Canadian dollar rallied against its U.S. counterpart following the GDP report, with USD/CAD slipping below 1.2500 handle to end the day at 1.2481. Looking to trade Canada GDP but don’t have a strategy? Download & review the DailyFX Advanced Guide for Trading the News to learn our 8 step strategy. 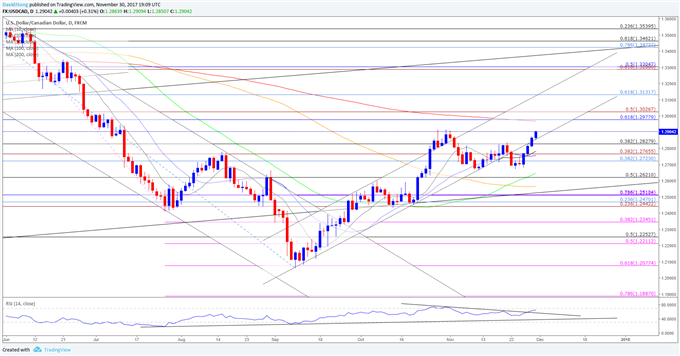