The preliminary 3Q U.S. Gross Domestic Product (GDP) report may heighten the appeal of the greenback as the amended figures are anticipated to show an upward revision in the growth rate, but signs of subdued inflation may spark a mixed market reaction as it limits the Fed’s scope to further normalize monetary policy in 2018.

It seems as though the Federal Open Market Committee (FOMC) will stay on course to deliver three rate-hikes per year as officials ‘expect interest rates to rise somewhat further and the size of our balance sheet to gradually shrink.’ In turn, incoming Chairman Jerome Powell may prepare U.S. households and businesses for higher borrowing-costs, but a growing number of Fed officials may cast a more shallow path for the benchmark interest rate as ‘several participants expressed concern that the persistently weak inflation data could lead to a decline in longer-term inflation expectations or may have done so already.’

As a result, the U.S. dollar stands at risk of facing headwinds ahead of the upcoming rotation within the FOMC especially if the central bank delivers a dovish rate-hike in December.

Impact that the U.S. GDP report had on EUR/USD during the previous quarter

The preliminary 2Q U.S. Gross Domestic Product (GDP) report showed an upward revision in the growth rate, with the economy expanding an annualized 3.0% during the three-months through June, while Personal Consumption increased 3.3% during the same period amid forecasts for a 3.0% print. However, the core Personal Consumption Expenditure (PCE), the Fed’s preferred gauge for inflation, narrowed to 1.4% per annum from an initial forecast of 1.5%, which was largely in-line with market expectations.

Despite the upward revision in U.S. GDP, the greenback struggled to hold its ground following the batch of mixed data prints, with EUR/USD climbing above the 1.1850 region to end the day at 1.1909. Looking to trade the U.S. GDP report but don’t have a strategy? Review the FREE DailyFX Advanced Guide for Trading the News to learn our 8 step strategy. 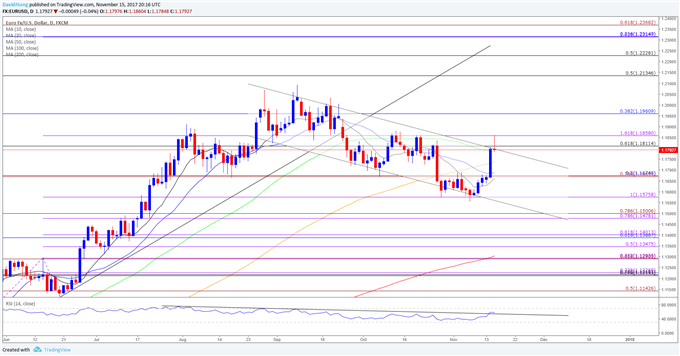