- Core Rate of Inflation Has Held Steady at 1.5% Per Annum for Two Consecutive Months.

Canada’s Consumer Price Index (CPI) is anticipated to slow down for the first time since June, and signs of easing price pressures may generate a near-term rebound in USD/CAD as it encourages the Bank of Canada (BoC) to carry a wait-and-see approach into 2018.

Keep in mind, the BoC appears to be on course to further normalize monetary policy next year as the central bank notes ‘less monetary policy stimulus will likely be required over time,’ but Governor Stephen Poloz and Co. may stick to the sidelines at the last-2017 meeting on December 6 as ‘wage and other data indicate that there is still slack in the labour market.’ With that said, USD/CAD remains at risk for a larger correction as the BoC tames expectations for an imminent rate hike, and the dollar-loonie exchange rate may continue to recoup the losses from earlier this as long as price and the Relative Strength Index (RSI) preserve the bullish formations carried over from September.

However, and unexpected pickup in the headline reading for inflation may trigger a bullish reaction in the Canadian dollar as it puts pressure on the BoC to raise the benchmark interest rate sooner rather than later, and USD/CAD may exhibit a more bearish behavior over the coming months as ‘the Bank estimates that the economy is operating close to its potential.’

Canada’s Consumer Price Index (CPI) picked up in September, with the headline reading climbing to an annualized 1.6% from 1.4% in August. A deeper look at the report showed energy costs increasing another 2.7% in September to lead the advance, with Transportation costs also rising 1.1%, while food prices narrowed another 0.8% after slipping 0.3% the month prior.

The Canadian dollar sold off following the below-forecast print, with USD/CAD climbing above the 1.2500 handle to end the day at 1.2621. Looking to trade Canada CPI but don’t have a strategy? Download & review the DailyFX Advanced Guide for Trading the News to learn our 8 step strategy. 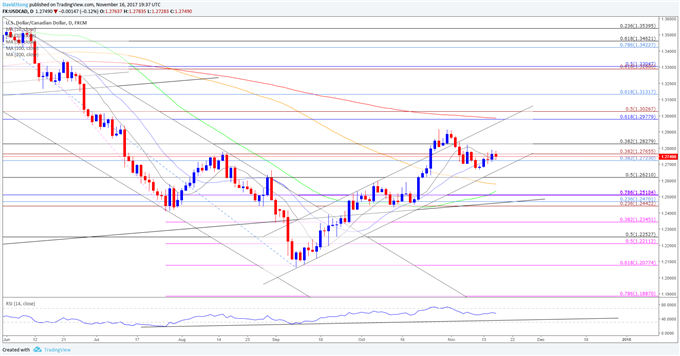