- Core Rate of Inflation to Rise 2.8% per Annum- Fastest Pace of Growth Since December 2011.

A pickup in the headline and core U.K. Consumer Price Index (CPI) may push GBP/USD towards the monthly-high (1.3321) as Bank of England (BoE) Governor Mark Carney would have to write an open letter to Chancellor of Exchequer Philip Hammond ‘explaining why inflation has moved away from target and what action the Bank is taking to bring inflation back to target.’

Signs of heightening price pressures may spur a growing rift within the Monetary Policy Committee (MPC) as Chief Economist Andrew Haldane warns ‘price rises across the whole economy are currently running well above the 2 percent inflation target and are expected to remain above-target for the next few years.’ In turn, GBP/USD may exhibit a more bullish behavior over the remainder of the year as ‘a majority of MPC members had judged that, if the economy continued to follow a path broadly consistent with the prospect of a continued erosion of slack and a gradual rise in underlying inflationary pressure, some withdrawal of monetary stimulus was likely to be appropriate over the coming months in order to return inflation sustainably to target.’

Keep in mind, the BoE may largely endorse a wait-and-see approach at its last policy meeting for 2017 after implementing a dovish rate-hike in November, and Governor Mark Carney and Co. may tame expectations for higher borrowing-costs as ‘there remain considerable risks to the outlook, which include the response of households, businesses and financial markets to developments related to the process of EU withdrawal.’

Impact that the U.K. CPI report has had on GBP/USD during the last release

The U.K. Consumer Price Index (CPI) climbed an annualized 3.0% in September to mark the fastest pace of growth since 2012, while the core rate of inflation held steady at 2.7% per annum for the second-month. A deeper look at the report showed prices for clothing & footwear advanced 3.9% on a monthly basis, with food prices also increasing 0.8%, while transportation costs narrowed 1.3% after rising 1.0% in August.

The British Pound struggled to hold its ground following the batch of in-line prints, with GBP/USD slipping below the 1.3200 handle during the North American trade to end the day at 1.3189. Interested in trading the U.K. CPI report but don’t have a plan? Download and review the DailyFX Advanced Guide for Trading the News for FREE to learn our 8 step strategy. 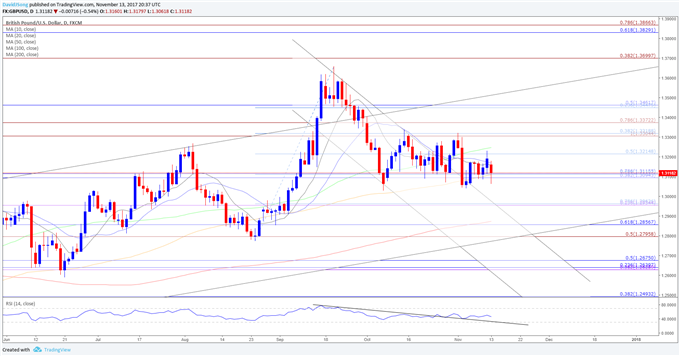