- Bank of England (BoE) to Raise Benchmark Interest Rate for First Time Since 2006.

The Bank of England (BoE) interest rate decision may spark a bullish reaction in the British Pound as the central bank is anticipated to deliver its first rate-hike since 2006.

A material shift in policy should heighten the appeal of Sterling as the BoE finally moves away from its easing-cycle, and GBP/USD may exhibit a more bullish behavior over the coming months if the Monetary Policy Committee (MPC) shows a greater willingness to implement additional rate-hikes over the coming months.

However, the fresh updates coming out of the BoE may rattle to the near-term resilience in the pound-dollar exchange rate should Governor Mark Carney and Co. endorse a wait-and-see approach for 2018, with the British Pound at risk of facing a kneejerk reaction if the central bank implements a one-time rise in borrowing costs.

The Bank of England (BoE) voted 7-2 to keep the benchmark interest rate the record-low, but went onto say that ‘recent developments suggest that remaining spare capacity in the economy is being absorbed a little more rapidly than expected at the time of the August Report, and that inflation remains likely to overshoot the 2% target over the next three years.’ The fresh comments suggest the Monetary Policy Committee (MPC) may alter the monetary policy outlook at the next quarterly meeting as the central bank ‘will undertake a full assessment of recent developments in the context of its November Inflation Report and accompanying economic projections,’ and Governor Mark Carney and Co. may start to normalize monetary policy ahead of 2018 as all ‘members continue to judge that, if the economy follows a path broadly consistent with the August Inflation Report central projection, then monetary policy could need to be tightened by a somewhat greater extent over the forecast period than current market expectations.’

The British Pound surged higher following the hawkish policy statement, with GBP/USD climbing above the 1.3300 handle to end the day at 1.3396.

New to Forex? Download the DailyFX Beginners Guide for Trading the News 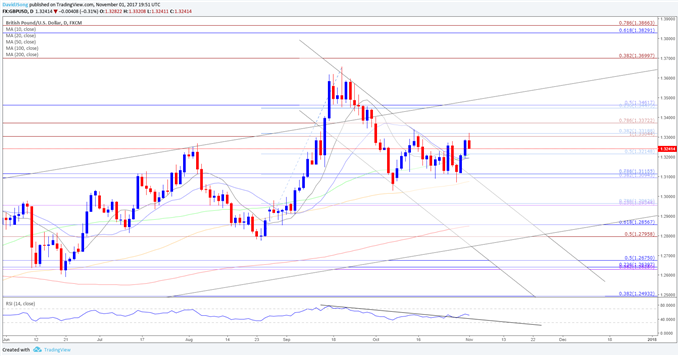