- Will the ECB Retain the December Deadline for the QE Program?

Even though the European Central Bank (ECB) remains in no rush to remove the zero-interest rate policy, the fresh updates from President Mario Draghi and Co. may heavily influence the near-term outlook for EUR/USD if the Governing Council unveils a detailed exit strategy.

With the quantitative easing (QE) program set to expire in December, a reduction from the current EUR 60B/month pace may prop up EUR/USD as the central bank start to move away from its easing-cycle. In turn, the Euro may exhibit a more bullish behavior going into the end of the month, but the single-currency stands at risk of facing a choppy reaction should the Governing Council vote in favor of carrying the asset-purchase program into 2018.

The European Central Bank (ECB) stuck to sidelines in September, with President Mario Draghi and Co. reiterating that the asset-purchases ‘are intended to run until the end of December 2017, or beyond, if necessary.’ Nevertheless, the Governing Council noted that ‘this autumn we will decide on the calibration of our policy instruments beyond the end of the year,’ and it seems as though the central bank will start to wind down its quantitative easing (QE) program as officials contend that ‘the ongoing economic expansion provides confidence that inflation will gradually head to levels in line with our inflation aim.’ Despite the initial dip in EUR/USD, the Euro regained its footing following the press conference with President Draghi, with the pair climbing above the 1.2000 handle to end the day at 1.2023. 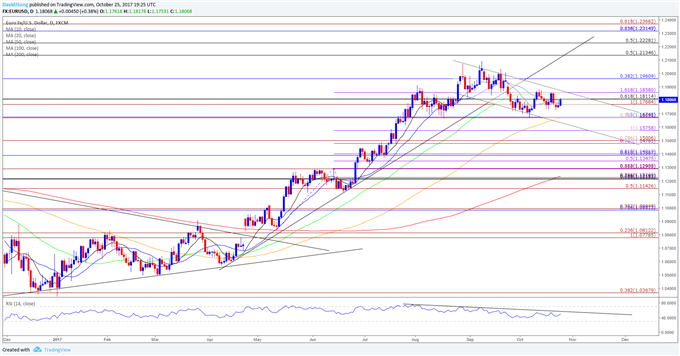 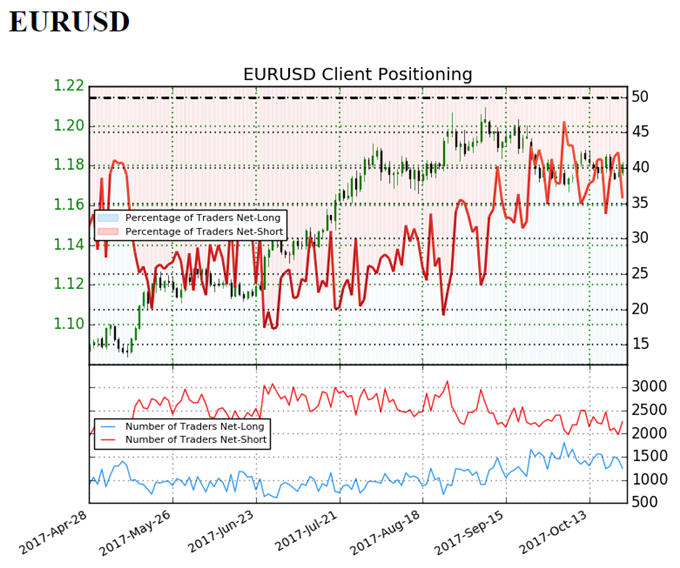 Retail trader data shows 35.7% of traders are net-long EUR/USD with the ratio of traders short to long at 1.8 to 1.

We typically take a contrarian view to crowd sentiment, and the fact traders are net-short suggests EUR/USD prices may continue to rise. Traders are further net-short than yesterday and last week, and the combination of current sentiment and recent changes gives us a stronger EUR/USD-bullish contrarian trading bias.