Another 0.4% rise in Canada Retail Sales paired with marked pickup in the Consumer Price Index (CPI) may derail the near-term rebound in USD/CAD as it encourages the Bank of Canada (BoC) to further normalize monetary policy over the coming months.

After delivering two consecutive rate-hikes, recent comments from Governor Stephen Poloz and Co. suggests the central bank will carry the current policy into 2018 as the central bank head notes that ‘there is no predetermined path for interest rates.’ However, sign of heightening price pressures may force the BoC to adopt a more hawkish tone as ‘recent economic data have been stronger than expected,’ and the broader shift in USD/CAD behavior may continue to take shape over the coming months as the central bank appears to be on course to implement higher borrowing-costs in 2018.

Canada’s Consumer Price Index (CPI) increased for the second consecutive month in August, with the headline reading climbing to an annualized 1.4% from 1.2% the month prior. Even though the pickup was largely drive by a higher gas and energy price, the core rate of inflation advanced to 1.5% per annum from 1.4% during the same period to mark the first rise since December. The Canadian dollar lost ground following the below-forecast prints, with USD/CAD climbing above the 1.2300 handle to end the day at 1.2329. 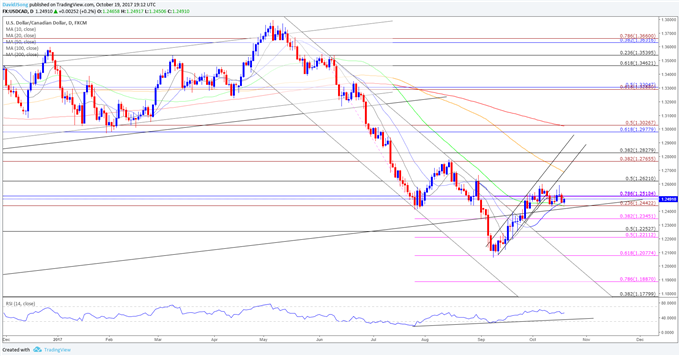 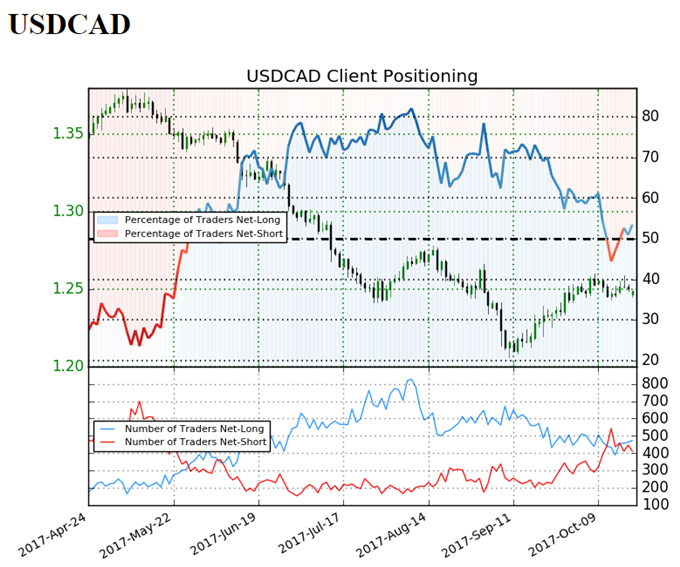 Retail trader data shows 53.5% of traders are net-long USD/CAD with the ratio of traders long to short at 1.15 to 1.

We typically take a contrarian view to crowd sentiment, and the fact traders are net-long suggests USD/CAD prices may continue to fall. Traders are further net-long than yesterday and last week, and the combination of current sentiment and recent changes gives us a stronger USD/CAD-bearish contrarian trading bias.