- Will the Statement Highlight a Growing Dissent Amid the Downward Revision in Interest Rate Dot-Plot?

The Federal Open Market Committee (FOMC) Minutes may heighten the appeal of the greenback as the central bank appears to be on course to deliver another rate-hike in 2017, but the fresh comments may highlight a growing dissent within the central bank as Fed officials trim the longer-term forecast for the benchmark interest rate.

Even though Chair Janet Yellen and Co. embark on a more aggressive approach to normalize monetary policy, central bank officials may continue to project a more shallow path for the Fed Funds rate as ‘overall inflation and the measure excluding food and energy prices have declined this year and are running below 2 percent.’ In turn, the FOMC may ultimately hit the end of its hiking-cycle ahead of schedule as the committee struggles to achieve the 2% target for price growth.

The Federal Open Market Committee (FOMC) Minutes suggest Chair Janet Yellen and Co. will stay on course to deliver three rate-hikes in 2017 as the central bank reiterates that ‘economic conditions would evolve in a manner that would warrant gradual increases in the federal funds rate.’ The FOMC went onto say that ‘the Committee should further clarify the time at which it expected to begin its program for reducing its securities holdings in a gradual and predictable manner,’ but central bank officials appear to be in no rush to implement higher borrowing-costs as ‘members saw the near-term risks to the economic outlook as roughly balanced, but, in light of their concern about the recent slowing in inflation, they agreed to continue to monitor inflation developments closely.’ The greenback lost ground following the cautious remarks, with EUR/USD bouncing back from the 1.1730 region to end the day at 1.1766. 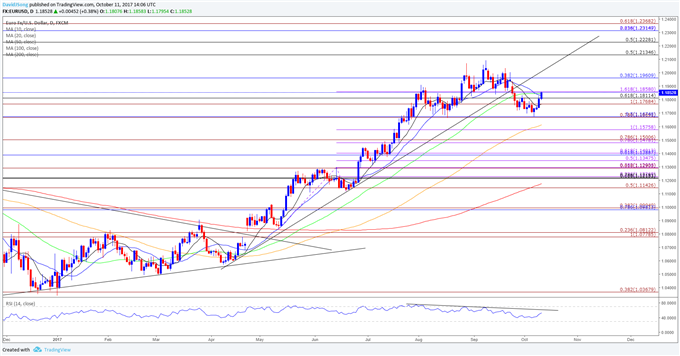 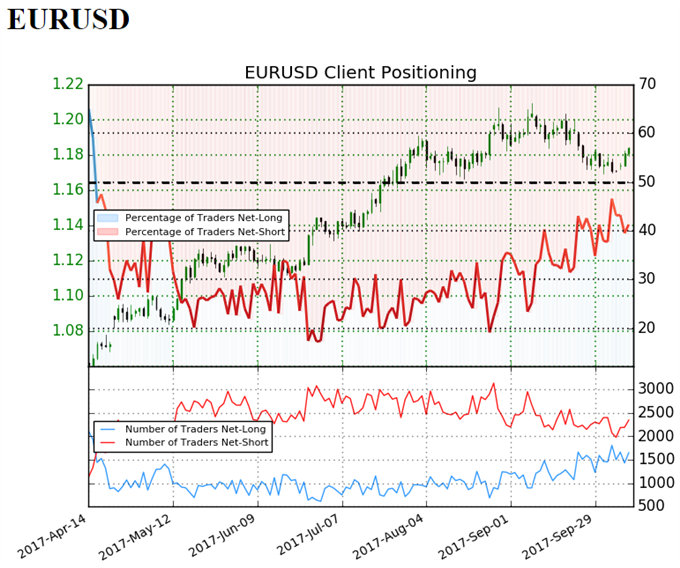 Retail trader data shows 41.3% of traders are net-long EUR/USD with the ratio of traders short to long at 1.42 to 1.