- Core Rate of Inflation to Uptick for First Time Since April.

Another downtick in the Euro-Zone’s Consumer Price Index (CPI) may spark a bearish reaction in EUR/USD as it puts pressure on the European Central Bank (ECB) to carry the quantitative easing (QE) program beyond December 2017.

The ECB may largely endorse a wait-and-see approach at the next policy meeting on July 20 as the central bank cuts its inflation forecast and warns ‘measures of underlying inflation remain low and have yet to show convincing signs of a pick-up.’ Nevertheless, stickiness in the core rate of inflation may fuel the near-term rally in EUR/USD as President Mario Draghi declares ‘deflationary forces have been replaced by reflationary ones,’ and the Governing Council may gradually change its tune over the coming months as the central bank now sees the euro-area growing an annualized 1.9% in 2017.

The Euro-Zone’s Consumer Price Index (CPI) narrowed more-than-expected in May, with the gauge slipping to an annualized 1.4% from 1.9% in April. The core rate of inflation reflected a similar dynamic as the reading softened to 0.9% per annum from 1.2% the month prior, while a separate report showed the euro-area jobless rate falling to an annualized 9.3% from a revised 9.4% in March. Despite the limited reaction to the mixed data prints, the Euro gained ground throughout the North American trade, with EUR/USD closing the day at 1.1242. 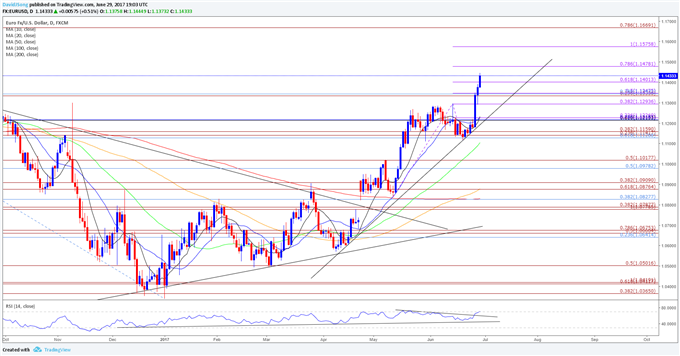 Retail trader data shows 18.6% of traders are net-long EUR/USD with the ratio of traders short to long at 4.37 to 1. In fact, traders have remained net-short since April 18 when EUR/USD traded near 1.0589; price has moved 8.0% higher since then. The number of traders net-long is 10.3% lower than yesterday and 39.2% lower from last week, while the number of traders net-short is 10.1% higher than yesterday and 22.2% higher from last week. For more information on retail sentiment, check out the new gauge developed by DailyFX based on trader positioning.