Waning U. of Michigan Confidence Survey to Dampen Appeal of USD

- U. of Michigan Confidence to Narrow for First Time Since February.

- 12-Month Inflation Expectations Climbed to 2.6% in May to Mark Second Highest Reading for 2017.

A downtick in the U. of Michigan Confidence survey may undermine the recent strength in the U.S. dollar as it dampens the outlook for growth and inflation.

Even though the Federal Open Market Committee (FOMC) appears to be on course to implement higher borrowing-costs over the coming months, signs of a slowing economy may push the central bank to buy more time as ‘market-based measures of inflation compensation remain low; survey-based measures of longer-term inflation expectations are little changed, on balance.’ However, another unexpected uptick in household sentiment may generate a bullish reaction in the greenback as it puts pressure on Chair Janet Yellen and Co. to further normalize monetary policy sooner rather than later.

Impact that the U. of Michigan survey has had on EUR/USD during the previous release

May 2017 U. of Michigan Confidence

The U. of Michigan Confidence survey unexpectedly increased for the third consecutive month in May, with the index climbing to 97.7 in May to mark the second-highest reading for 2017. A deeper look at the report showed 12-month inflation expectations also picked up during the same period, with the gauge advancing to 2.6% from 2.5% in April. Nevertheless, the better-than-expected print generated a limited market reaction, with EUR/USD holds its ground throughout the North American trade to end the day at 1.0931.

Bearish USD Trade: U. of Michigan Survey Slips to 97.0 or Lower 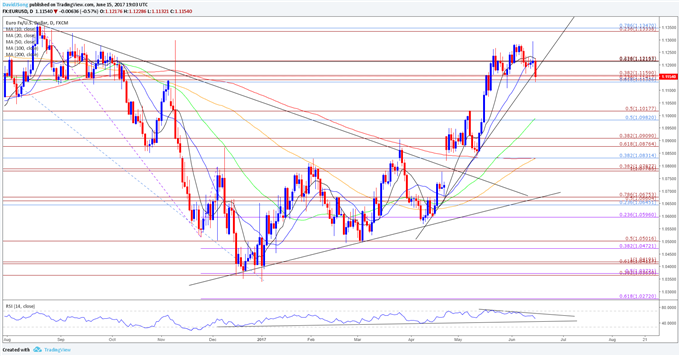 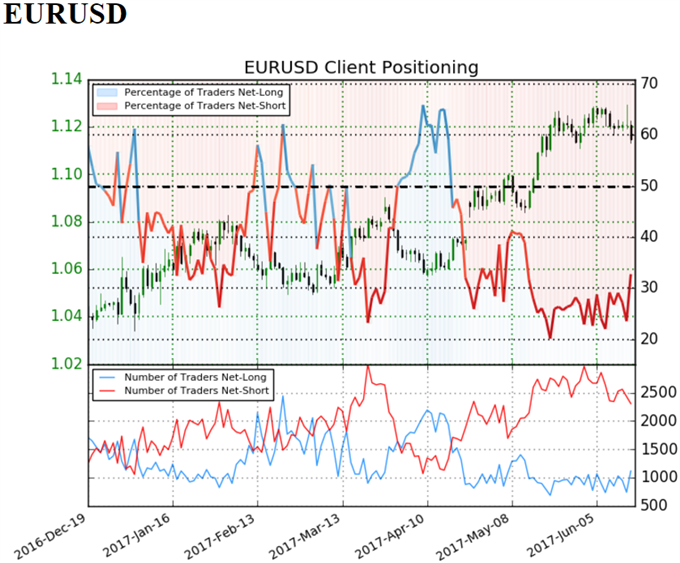 Retail trader data shows 32.8% of traders are net-long EUR/USD with the ratio of traders short to long at 2.05 to 1. In fact, traders have remained net-short since April 18 when EUR/USD traded near 1.05975; price has moved 5.2% higher since then. The percentage of traders net-long is now its highest since May 11 when EURUSD traded near 1.08632. The number of traders net-long is 35.3% higher than yesterday and 13.5% higher from last week, while the number of traders net-short is 18.3% lower than yesterday and 9.1% lower from last week.. For more information on retail sentiment, check out the new gauge developed by DailyFX based on trader positioning.