A pickup in Canada’s Consumer Price Index (CPI) may generate a near-term pullback in USD/CAD as signs of stronger inflation puts pressure on the Bank of Canada (BoC) to lift the benchmark interest rate off of the record-low.

Faster price growth may push the BoC to change its tune for monetary policy as ‘recent data indicate that economic growth has been faster than was expected,’ but central bank may merely attempt to buy more time at the next interest rate decision on May 24 as officials expected inflation to ‘return to 2 per cent later in the projection horizon as the output gap closes.’ With that said, the BoC may stick to the current script as the core rate of inflation remains subdued, and more of the same from Governor Stephen Poloz and Co. may support a long-term bullish outlook for USD/CAD especially as the Federal Open Market Committee (FOMC) is widely anticipated to deliver a 25bp rate-hike in June.

Canada’s Consumer Price Index (CPI) narrowed more than expected in March, with the headline reading slipping to an annualized 1.6% from 2.0% the month prior, while the core rate of inflation held steady at 1.3% for the third consecutive month. A deeper look at the report showed the cost for food fell 1.9% per annum, with prices for clothing/footwear contraction 0.9% during the same period, while gasoline prices climbed an annualized 15.2% in March. The Canadian dollar struggled to hold its ground following the soft inflation report, with USD/CAD bouncing back from 1.3457 to end the day at 1.3494. 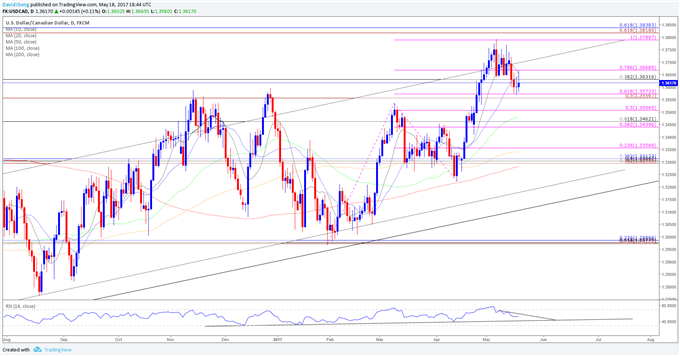 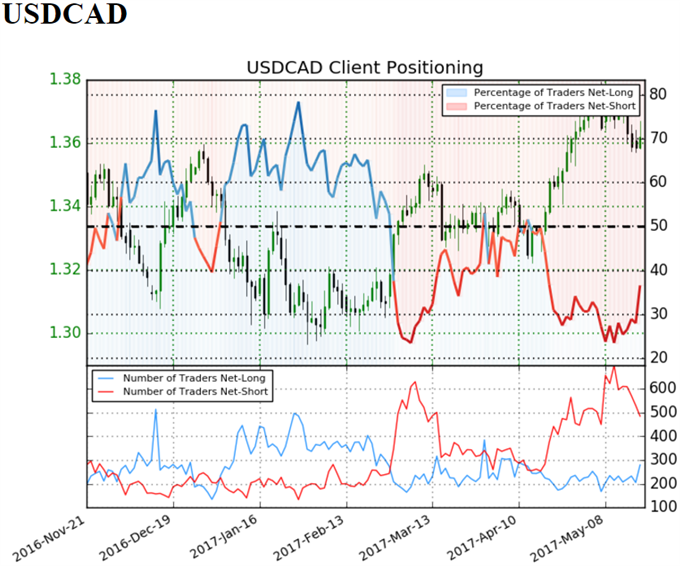 Retail trader data shows 36.6% of traders are net-long USD/CAD with the ratio of traders short to long at 1.73 to 1. In fact, traders have remained net-short since April 18 when USD/CAD traded near 1.33242; price has moved 2.2% higher since then. The number of traders net-long is 19.7% higher than yesterday and 19.1% higher from last week, while the number of traders net-short is 12.3% lower than yesterday and 24.5% lower from last week. For more information on retail sentiment, check out the new gauge developed by DailyFX based on trader positioning.