- Jobless Rate to Hold at Annualized 5.9% for Third Month.

Australia’s Employment report may prop up the AUD/USD exchange rate over the next 24-hours of trade as the economy is anticipated to add another 5.0K jobs in April.

A further improvement in labor market dynamics may heighten the appeal of the Australia dollar as it boosts the outlook for growth and inflation, and the Reserve Bank of Australia (RBA) may change its tune over the coming months as ‘forward-looking indicators continued to suggest that employment growth would maintain its recent pace and spare capacity in the labour market would decline gradually.’ However, Governor Philip Lowe and Co. may attempt to buy more time as officials warn ‘growth in housing credit had continued to outpace growth in household incomes, which suggested that the risks associated with household balance sheets had been rising,’ and the RBA may preserve the accommodate policy stance throughout 2017 as wage growth remains at a record-low.

Australia added another 60.9K jobs in March led by a jump in full-time positions, while the jobless rate held steady at an annualized 5.9% for the second month. The ongoing improvement in the labor market may encourage the Reserve Bank of Australia (RBA) to highlight an improved outlook for the region, but the central bank appears to be in no rush to lift the cash rate off of the record-low amid the rebalancing in the real economy. Nevertheless, the Australian dollar gained ground following the better-than-expected employment report, with the pair ending the day at 0.7568. 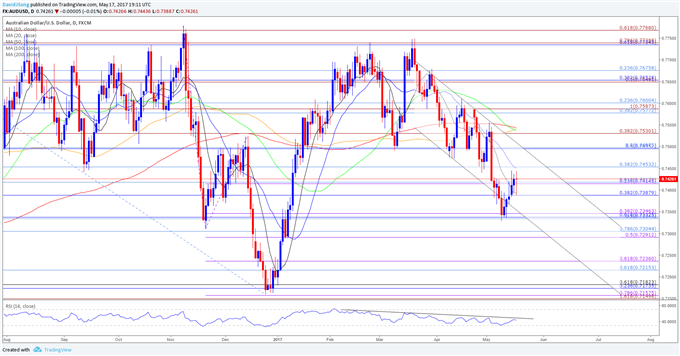 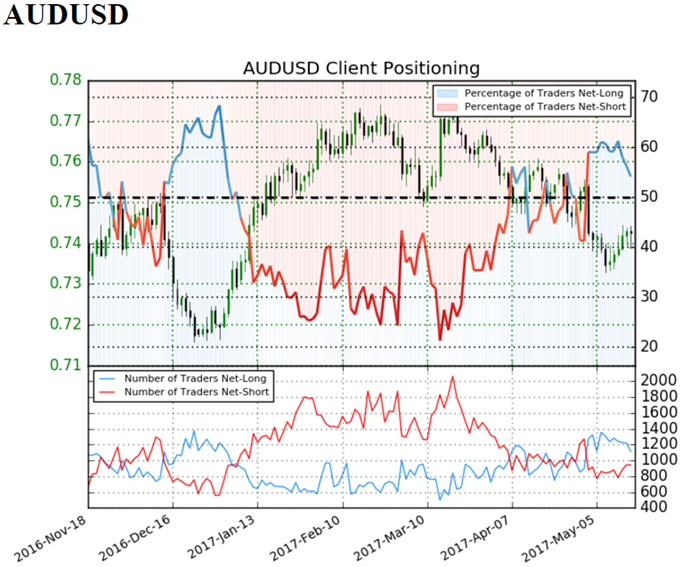 Retail trader data shows 54.2% of traders are net-long AUD/USD with the ratio of traders long to short at 1.18 to 1. In fact, traders have remained net-long since May 03 when AUD/USD traded near 0.75395; price has moved 1.5% lower since then. The percentage of traders net-long is now its lowest since May 02 when AUDUSD traded near 0.75395. The number of traders net-long is 12.5% lower than yesterday and 14.6% lower from last week, while the number of traders net-short is 0.7% lower than yesterday and 5.1% higher from last week. For more information on retail sentiment, check out the new gauge developed by DailyFX based on trader positioning.