- Australia Wage Price Index to Hold Steady at 1.9%- Lowest Since Recordkeeping Began in 1998.

- Will Weak Household Earnings Keep the RBA on Hold Throughout 2017?

Australia’s Wage Price Index may curb the near-term advance in AUD/USD as household earnings are projected to hold steady at the record-low of 1.9% for the third consecutive quarter.

Another lackluster print may dampen the appeal of the aussie as it encourages the Reserve Bank of Australia (RBA) to keep the cash rate at the record-low of 1.50%, and the central bank may stick to a dovish script throughout 2017 as officials warn ‘growth in housing credit had continued to outpace growth in household incomes, which suggested that the risks associated with household balance sheets had been rising.’ With that said, Governor Philip Lowe & Co. may endorse a wait-and-see approach for the foreseeable future as ‘wage pressures were expected to rise only gradually,’but an unexpected pickup in household earnings may fuel the recent series of higher highs & lows in AUD/USD as it boosts interest-rate expectations.

Australia’s Wage Price Index held steady at an annualized 1.9% for the second consecutive quarter to mark the slowest pace of growth since the series began in 1998, and the ongoing weakness in household earnings may encourage the Reserve Bank of Australia (RBA) to keep the cash rate at the record-low throughout 2017 amid the ongoing slack in the real economy. Despite the limited market reaction, the Australian dollar gained ground following the report, with AUD/USD closing the day at 0.7702. 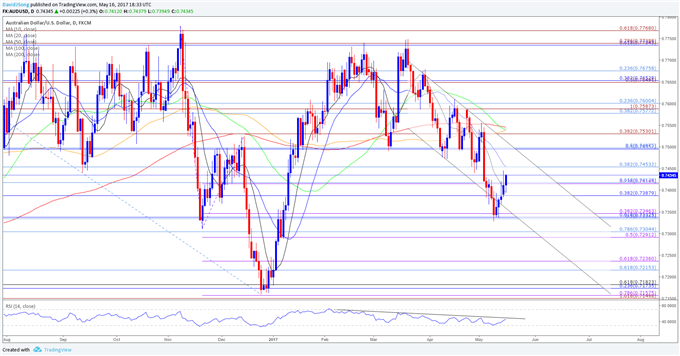 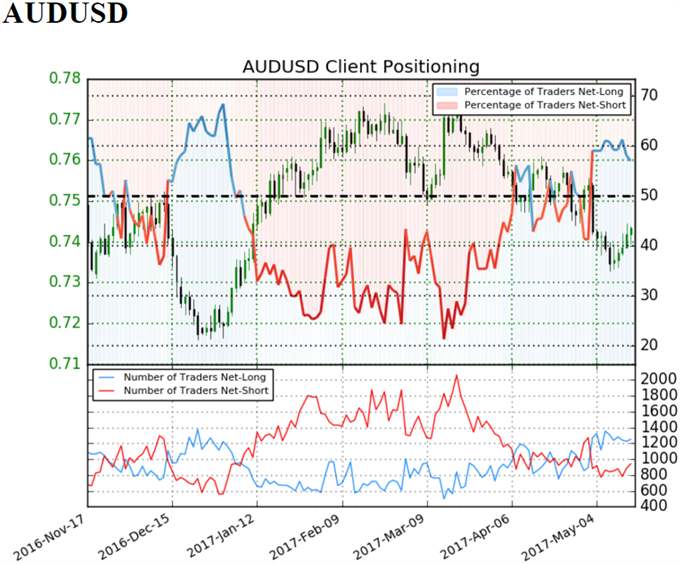 Retail trader data shows 57.1% of traders are net-long AUD/USD with the ratio of traders long to short at 1.33 to 1. In fact, traders have remained net-long since May 03 when AUD/USD traded near 0.75395; price has moved 1.4% lower since then. The number of traders net-long is 5.0% higher than yesterday and 4.3% lower from last week, while the number of traders net-short is 2.8% lower than yesterday and 6.6% higher from last week.For More Information on Retail Sentiment, Check Out the New Gauge Developed by DailyFX Based on Trader Positioning.