- Core Rate of Inflation to Expand 2.3% per Annum- Fastest Rate of Growth Since June 2013.

A marked pickup in both the headline and core U.K. Consumer Price Index (CPI) may fuel the relief rally in GBP/USD as it puts pressure on the Bank of England (BoE) to normalize monetary policy sooner rather than later.

The BoE’s latest attempt to buy more time appears to have tamed the near-term recovery in the pound-dollar exchange rate, but signs of heightening price pressures may boost the appeal of Sterling especially as Governor Mark Carney and Co. now warn ‘monetary policy could need to be tightened by a somewhat greater extent over the forecast period than the very gently rising path implied by the market yield curve underlying the May projections.’ Even though the BoE sees inflation ‘peaking a little below 3%’ later this year, signs of heightening price pressures may trigger a bullish reaction and keep GBP/USD afloat as it lifts interest-rate expectations. Nevertheless, another weaker-than-expected CPI report may undermine the recent resilience in the British Pound as it encourages the majority to keep the benchmark interest rate at the record-low of 0.25% beyond 2017.

The U.K Consumer Price Index (CPI) increased an annualized 2.3% for the second consecutive month in March, while the core rate of inflation narrowed to 1.8% from 2.0% during the same period amid forecasts for a 1.9% print. A deeper look at the report showed the weakness was largely driven by easing transportation costs, but the recent softness may do little to alter the monetary policy outlook as the Bank of England (BoE) persistently warns ‘there are limits to the extent to which above-target inflation can be tolerated.’ Nevertheless, the mixed market reaction was short-lived, with GBP/USD gaining ground throughout the North American trade to end the day at 1.2492. 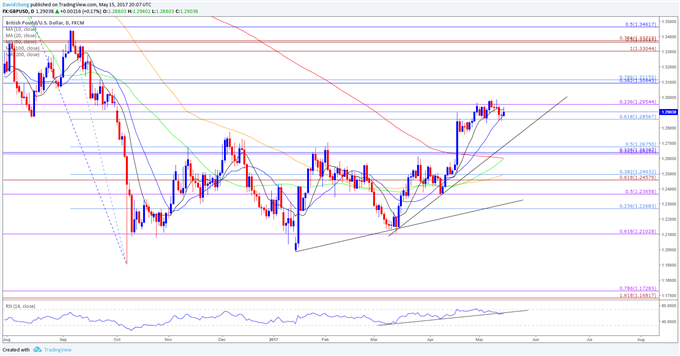 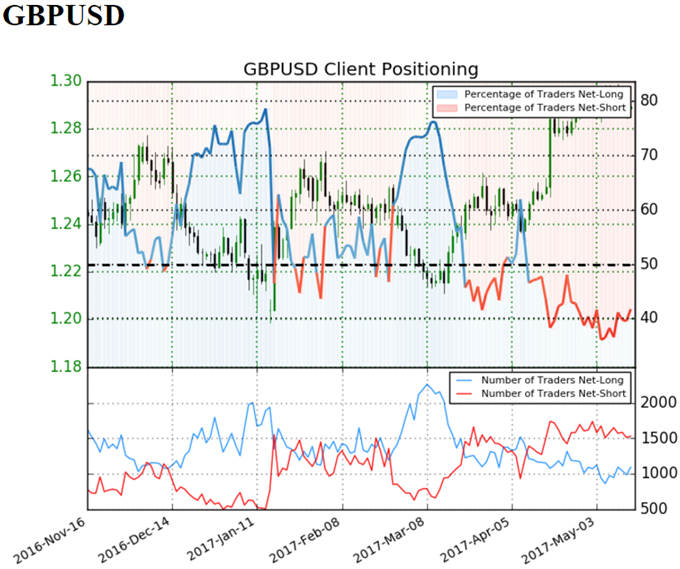 Retail trader data shows 41.7% of traders are net-long GBP/USD with the ratio of traders short to long at 1.4 to 1. In fact, traders have remained net-short since April 12 when GBP/USD traded near 1.23717; price has moved 4.2% higher since then. The number of traders net-long is 6.1% higher than yesterday and 10.7% higher from last week, while the number of traders net-short is 2.2% lower than yesterday and 6.0% lower from last week..For More Information on Retail Sentiment, Check Out the New Gauge Developed by DailyFX Based on Trader Positioning