The Federal Open Market Committee’s (FOMC) interest rate decision may generate a limited market reaction as the central bank is widely expected to keep the benchmark interest rate on hold in May, but the fresh policy statement may boost the appeal of the greenback should the 2017-voting members reveal a more detailed exit strategy.

With Fed Fund Futures still highlighting a 70% probability for a June rate-hike, the FOMC may increase its efforts to prepare U.S. households and businesses for higher borrowing-costs as the central bank appears to be well on its way to fulfil its dual mandate for full-employment & price stability. In turn, talks of an imminent rate-hike accompanied by a wider discussion to unload the balance sheet may generate a bullish reaction in the greenback, but more of the same from Chair Janet Yellen & Co. may dampen the appeal of the U.S. dollar as officials tame market expectations and look to buy more time.

Even though Minneapolis Fed President Neel Kashkari dissented against the majority, the Federal Open Market Committee (FOMC) voted 9 to 1 to raise the benchmark interest rate to a fresh target range of 0.75% to 1.00%, with officials endorsing three to four rate-hikes for 2017. However, the U.S. dollar came under pressure as the fresh projections coming out of the central bank continue to show a terminal fed funds rate close to 3.00%, with EUR/USD snapping back from 1.0616 to end the day at 1.0702. 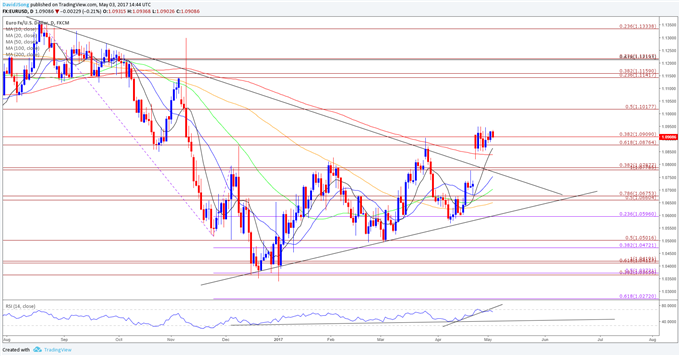