- ISM Non-Manufacturing Survey to Rebound to 55.8 in April..

- Employment Component Slipped to 51.6 in March- Lowest Since August 2016.

Even though the Federal Open Market Committee’s (FOMC) looming interest rate decision takes center stage, a material pickup in the ISM Non-Manufacturing survey may undermine the recent resilience in EUR/USD should the report highlight an improved outlook for the U.S. economy.

Signs of stronger serviced-based activity may heighten the appeal of the U.S. dollar as it puts pressure on the FOMC to raise the benchmark interest rate sooner rather than later, and the central bank may lay out a more detailed strategy over the coming months as officials look to unload the balance sheet later this year or in early 2018. In turn, a rebound to 55.8 or higher may encourage a bullish reaction in the greenback, but another below-forecast print may prop up EUR/USD as it drags on interest-rate expectations.

The ISM Non-Manufacturing survey narrowed more-than-expected in March, with the index slipping to 55.2 from 57.6 the month prior. A deeper look at the report showed the gauge for New Orders softened to 58.9 from 61.2 in February, with the Employment component declining to 51.6 from 55.2 during the same period, while New Export Orders advanced to 62.5 from 57.0. The mixed data prints spurred a lackluster reaction in EUR/USD, with the pair consolidating throughout the North American trade to end the day at 1.0662. 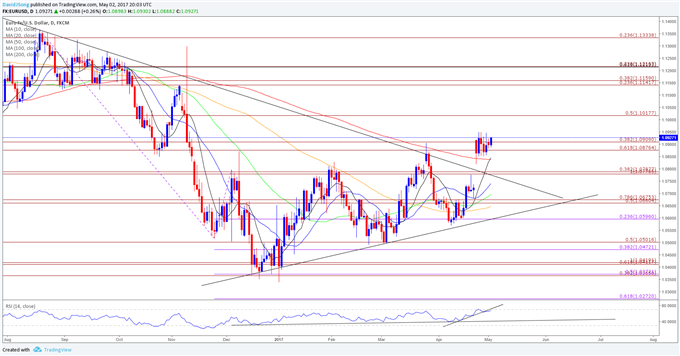