- Will the Governing Council Increase Its Efforts to Ward Off a Taper-Tantrum?

The European Central Bank (ECB) is widely expected to retain the zero-interest rate policy (ZIRP) as it struggles to achieve its one and only mandate for price stability, but the Governing Council may sound more dovish this time around in an effort to ward off a ‘taper tantrum.’

Why Is This Event Important:With the ECB on course to narrow its asset-purchases to EUR 60B/month, the central bank may continue to reduce its quantitative easing (QE) program ahead of the December 2017 deadline, but President Mario Draghi and Co. may increase their efforts to tame market speculation as the growth outlook for the Euro-Zone remains tilted to the downside. With that said, the Governing Council may keep the door open to further extend its non-standard measures in order to encourage a stronger recovery.

Waning confidence paired with soft inflation may encourage the ECB to further support the monetary union, and the Euro may give back the advance following the French election should the central bank show a greater willingness to carry the QE program beyond the December 2018 deadline.

Nevertheless, the pickup in private-sector activity accompanied by the ongoing expansion in the trade balance may push the ECB to adopt an improved outlook for the euro-area, and the Euro may stage a larger advance over the coming days should the Governing Council show a greater willingness to move away from its easing-cycle. 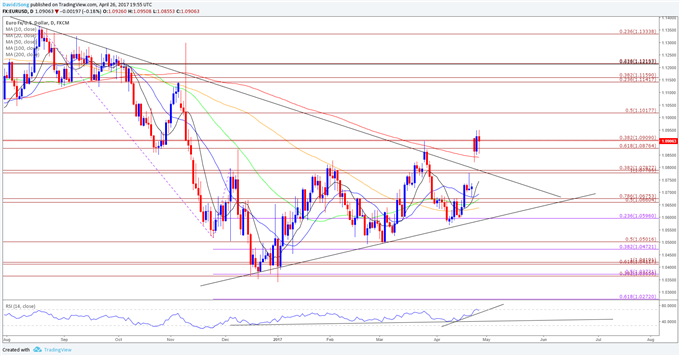 The European Central Bank (ECB) stuck to the sidelines in March, but kept the door open to further extend its easing-cycle as ‘a cross-check of the outcome of the economic analysis with the signals coming from the monetary analysis confirmed the need for a continued very substantial degree of monetary accommodation to secure a sustained return of inflation rates towards levels that are below, but close to, 2% without undue delay.’ It seems as though the ECB will endorse a wait-and-see approach for the foreseeable future as ‘the risks surrounding the euro area growth outlook have become less pronounced,’ but the Governing Council may continue to highlight a dovish outlook for monetary policy even as the central bank plans to reduce its asset-purchases to €60B/month starting in April. The Euro edged higher following the rate decision, but the market reaction was short-lived, with EUR/USD paring the advance to close the day at 1.0576.