- Core Inflation to Rebound from 1.6%- Lowest Reading Since the Series Began in 1983.

A material pickup in Australia’s headline and core Consumer Price Index (CPI) may alter the monetary policy outlook and heighten the appeal of the aussie should the data prints put pressure on the Reserve Bank of Australia (RBA) to start normalizing monetary policy.

Signs of heightening price pressures may push the RBA to change its tune over the coming months, and the central bank may show a greater willingness to move away from its easing-cycle as inflation approaches the 2% to 3% target band. However, the RBA may continue to endorse a wait-and-see approach at the April 4 meeting as the central bank warns ‘global inflation had increased, driven by the rise in oil prices over 2016,’ and Governor Philip Lowe and Co. may retain the record-low cash rate throughout 2017 as ‘wage growth and broader measures of labour cost pressures remained subdued.’

Improved confidence accompanied by the ongoing expansion in Australia’s labor market may generate a stronger-than-expected CPI print, and a positive development may prop up AUD/USD as it encourages the RBA to normalize monetary policy sooner rather than later.

However, Australian firms may offer discounted prices amid the slowdown in private-sector consumption, and another below-forecast reading may spur a bearish reaction in the aussie as it drags on interest-rate expectations. 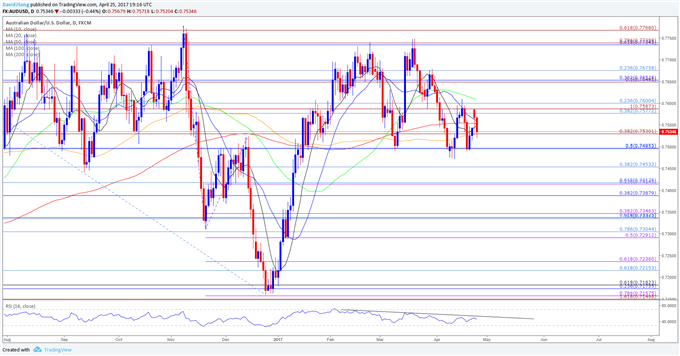 Australia’s Consumer Price Index (CPI) climbed an annualized 1.5% during the last three-months of 2016 after expanding 1.3% in the third-quarter, while the core rate of inflation narrowed to 1.6% from 1.7% during the same period. The softer-than-expected CPI report may encourage the Reserve Bank of Australia (RBA) to keep the official cash rate at the record-low throughout 2017 as the central bank warns ‘the rise in underlying inflation is expected to be a bit more gradual with growth in labour costs remaining subdued.’ The Australian dollar struggled to hold its ground following the release, but the market reaction was short-lived, with AUD/USD regaining its footing during the day to close at 0.7571.