- U.S. ISM Non-Manufacturing Survey to Narrow from Highest Reading Since 2015.

A downtick in the ISM Non-Manufacturing survey may drag on the U.S. dollar as it dampens the outlook for growth and inflation, but another unexpected uptick in business sentiment may put increased pressure on the Federal Open Market Committee (FOMC) to raise the benchmark interest rate sooner rather than later.

With Fed Fund Futures still pricing a less than 60% probability for a June rate-hike, data prints pointing to slower growth may encourage the FOMC to endorse a wait-and-see approach throughout the first-half of the year, and the dollar stands at risk of facing headwinds over the near-term as market participants mull the scope for three rate-hikes in 2017. Nevertheless, with a growing number of central bank officials showing a greater willingness to adjust the Fed’s balance sheet, it seems as though Chair Janet Yellen will stay on course to further normalize monetary policy especially as the U.S. economy approaches ‘full-employment.’

The slowdown in private-sector consumption may drag on business sentiment as it remains one of the leading drivers of U.S. growth, and a marked downtick in the ISM survey may produce headwinds for the greenback as market participants push out bets for the next Fed rate-hike.

Nevertheless, the ongoing improvement in the labor market paired with the pickup in housing market activity may instill an improved outlook for service-based activity, and another uptick in the ISM survey may spark a bullish reaction in the dollar as it boosts interest-rate expectations. 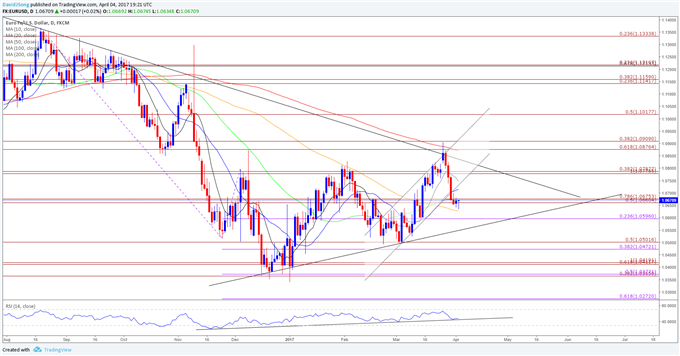 The ISM Non-Manufacturing survey unexpectedly picked up in February, with the gauge climbing to 57.6 from 56.5 the month prior to mark the highest reading since October 2015. A deeper look at the report showed the gauge for New Orders advance to 61.2 from 58.6 in January, with the Employment component highlight a similar behavior as the reading climbed to 55.2 from 54.7, while the Prices Paid index narrowed to 57.7 from 59.0 during the same period. Despite the better-than-expected print, the ISM survey generate a muted reaction, with EUR/USD ticking higher throughout the North American trade to close the day at 1.0621.

Silver Price Makes It Nine in a Row, Turning Lower off July Trend-line