The Reserve Bank of Australia (RBA) interest rate decision may yield a limited market reaction as Governor Philip Lowe and Co. are widely anticipated to endorse a wait-and-see approach for monetary policy, but the aussie-dollar exchange rate stands at risk of extending the decline from the end of March if the central bank attempt to buy more time.

AUD/USD may continue to operate within the range carried over from 2016 as the RBA notes the current stance ‘would be consistent with sustainable growth in the economy and achieving the inflation target over time,’ but the fresh rhetoric may drag on the Australian dollar should the central bank show a greater willingness to preserve the current policy throughout 2017. Indeed, Governor Lowe and Co. may increase their efforts to tame interest-rate expectations as officials emphasize ‘wage growth and underlying inflation were expected to rise, but only gradually,’ and the diverging paths for monetary policy may instill a bearish outlook for AUD/USD especially as the Federal Reserve appears to be on course to implement higher borrowing-costs over the coming months.

Easing consumption accompanied by the slowdown in private-sector lending may push the RBA to adopt a more cautious outlook for the region, and the policy statement may spark a bearish reaction in the Australian dollar if the central bank increases its efforts to anchor market speculation for rate-hike.

However, improved confidence paired with the ongoing expansion in the housing market may encourage Governor Lowe to act over the coming months, and the interest rate decision may heighten the appeal of the aussie should the central bank highlight a shift in the monetary policy outlook. 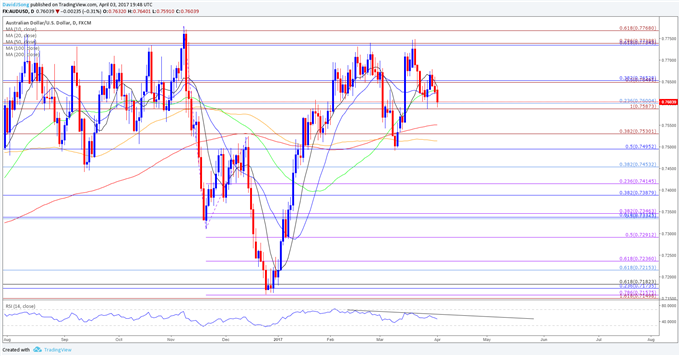 The Reserve Bank of Australia (RBA) stuck to the sidelines in March, with Governor Philip Lowe and Co. largely endorsing a wait-and-see approach for monetary policy after keeping the official cash rate at the record-low of 1.50%. The RBA appears to be in no rush to normalize policy as officials argue ‘headline inflation rates have moved higher in most countries, partly reflecting the higher commodity prices,’ and it seem as though the central bank will continue to tame interest rate expectations in the first-half of 2017 as the rise in underlying price growth is expected to be ‘a bit more gradual.’ The Australian dollar managed to climb back above the 0.7600 handle following the RBA meeting, but the move was short-lived, with AUD/USD ending the day at 0.7584.

Silver Price Makes It Nine in a Row, Turning Lower off July Trend-line