- Euro-Zone Consumer Price Index (CPI) to Pull Back from Fastest Pace of Growth Since 2013.

- Core Inflation to Slow Down for First Time Since August.

The Euro-Zone’s Consumer Price Index (CPI) may fuel the recent sell-off in EUR/USD as the headline and core rate of inflation are projected to slow in March.

Easing inflation may put increased pressure on the European Central Bank (ECB) to further extend the quantitative easing (QE) program as the Governing Council struggles to achieve its one and only mandate to ensure price stability. Even though the ECB remains on course to reduce its asset-purchases to EUR 60B/month starting in April, President Mario Draghi and Co. may retain the non-standard measure beyond the December 2017 deadline amid the ongoing slack in the monetary union. However, the ECB may continue to wind-down the QE program as ‘the monetary policy measures put in place since June 2014 are significantly supporting borrowing conditions for firms and households and thereby credit flows across the euro area,’ and signs of sticky price growth may boost the appeal of the single-currency as market participants scale back bets for more easing.

Narrowing sales accompanied by the recent slowdown in private-sector borrowing may drag on consumer prices, and a marked downtick in the CPI may generate fresh weekly lows in EUR/USD as it boosts speculation for additional monetary support.

Nevertheless, European firms may pass on higher costs amid the improvement in household confidence, and stickiness in the headline and core reading for inflation may spark a bullish reaction in the Euro as the data encourages the ECB to gradually move away from its easing-cycle. 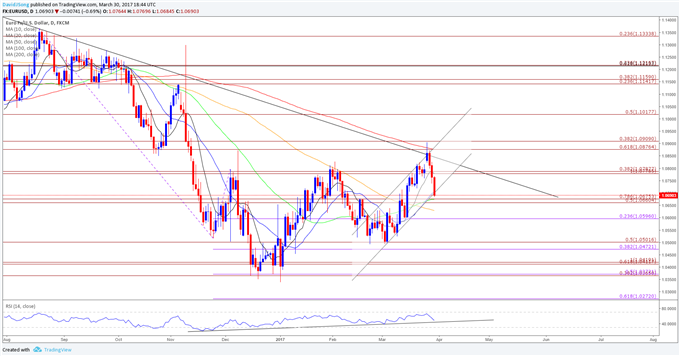 The Euro-Zone’s Consumer Price Index (CPI) climbed an annualized 2.0% in February following a 1.8% expansion the month prior, while the core rate of inflation held steady at 0.9% per annum for the third consecutive month. At the same time, a separate report showed the Producer Price Index (PPI) increased an annualized 3.5% in January amid forecast for a 3.2% print, and signs of stronger price growth may limit the European Central Bank’s (ECB) scope to further support the real economy especially as the Governing Council plans to conclude its quantitative easing (QE) program in December 2017. Nevertheless, the Euro showed a limited reaction to the inflation reports, with EUR/USD losing ground during the North American trade to end the day at 1.0505.

EUR/USD – Will it Vote Yes or No on a Breakout?

FTSE 100 Dropping into Trend Support, but Will It Hold?