- Will Governor Wheeler Retain the Status Quo Ahead of His Departure?

The Reserve Bank of New Zealand (RBNZ) is widely expected to keep the official cash rate at the record-low of 1.75%, but the fresh remarks from Governor Graeme Wheeler and Co. may dampen the appeal of the local currency should the central bank keep the door open to further support the real economy.

Why Is This Event Important:It seems as though the RBNZ will stick with the status quo as Governor Wheeler is scheduled to leave the helm in September, but the central bank appears to be in no rush to move away from its easing-cycle as ‘numerous uncertainties remain, particularly in respect of the international outlook, and policy may need to adjust accordingly.’ In turn, the New Zealand dollar may come under pressure should the RBNZ adopt a more dovish outlook for monetary policy, but more of the same rhetoric may fuel the near-term recovery in NZD/USD as Fed officials continue to forecast a terminal fed funds rate close to 3.00%.

Waning confidence accompanied by the slowdown in private-sector consumption may push the RBNZ to sound more cautions this time around, and the New Zealand dollar stands at risk of facing near-term headwinds should the central bank show a greater willingness to further reduce the official cash rate.

Nevertheless, the pickup in business outputs paired with signs of a stabilizing housing market may encourage Governor Wheeler and Co. to highlight an improved outlook for the region, and the kiwi-dollar may extend the advance from earlier this month should the RBNZ tame expectations for additional monetary support. 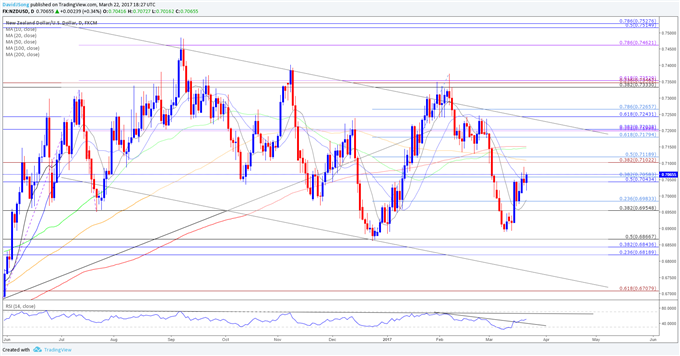 The Reserve Bank of New Zealand (RBNZ) kept the official cash rate at the record-low of 1.75% at its first policy meeting for 2017, and it seems as though the central bank is in no rush to move away from its easing-cycle as Governor Graeme Wheeler and Co. note ‘monetary policy will remain accommodative for a considerable period.’ Moreover, the RBNZ struck a similar tone to its major counterparts and argued ‘global headline inflation has increased, partly due to rising commodity prices,’ and the central bank may keep the door open to further support the real economy as ‘numerous uncertainties remain, particularly in respect of the international outlook, and policy may need to adjust accordingly.’ The New Zealand struggled to hold its ground following the policy meeting, with NZD/USD slipping below the 0.7250 region to end the day at 0.7187.