A pickup in the U.K.’s headline and core Consumer Price Index (CPI) may fuel the near-term rebound in GBP/USD as it raises the risk of seeing a greater dissent within Bank of England (BoE).

Above-target inflation may spark a growing rift within the Monetary Policy Committee (MPC) following the 8 to 1 vote in March, but the discord could be short lived with board member Kristen Forbes scheduled to depart the central bank at the end of June. With that said, Governor Mark Carney may continue to tame interest rate expectations and reiterate ‘monetary policy can respond, in either direction’ as Prime Minister Theresa May plans to trigger Article 50 of the Lisbon Treaty on March 29. The U.K.’s departure from the European Union (EU) may heighten the bearish sentiment surrounding the British Pound especially as Scotland appears to be on course to hold a second referendum, and renew fears of a ‘hard Brexit’ may push the central bank to further support the real economy as ‘the Committee expects a slowdown in aggregate demand over the course of this year.’

Improved business confidence along with the recent uptick in private-sector lending may offer a meaningful boost to U.K. price growth, and a stronger-than-expected CPI report may foster a bullish reaction in the British Pound as it puts pressure on the BoE to normalize monetary policy sooner rather than later.

Nevertheless, subdued wage growth paired with the weakness in household spending may encourage U.K. firms to offer discounted prices, and another below-forecast print may trigger near-term headwinds for sterling as it drags on interest-rate expectations. 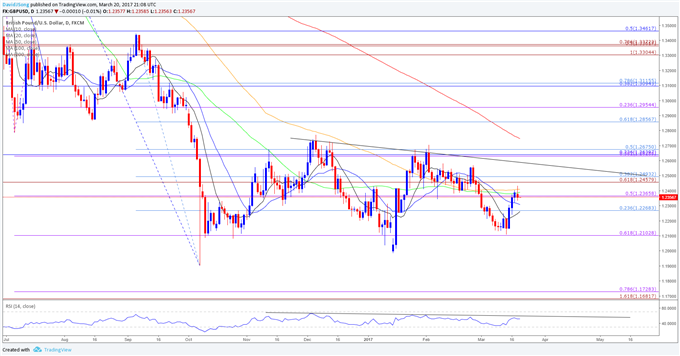 The U.K. Consumer Price Index (CPI) climbed an annualized 1.8% in January to mark the fastest pace of growth since June 2014, while the core rate of inflation unexpectedly held steady at 1.6% per annum for the second month in January. A deeper look at the report showed the weaker-than-expected print was larger drive by a 0.5% decline in prices for food & beverage, while Transportation costs grew an annualized 5.7% on the back of higher energy prices. The British Pound struggled to hold its ground following the weaker-than-expected print, with GBP/USD slipping below the 1.2500 handle to end the day at 1.2466.