Improved U. of Michigan Confidence Survey to Curb USD Weakness

A rebound in the U. of Michigan Confidence survey may curb the recent weakness in the U.S. dollar as it encourages the Federal Open Market Committee (FOMC) to further normalize monetary policy over the coming months.

The fresh developments coming out of the Federal Open Market Committee (FOMC) appears to be dragging on interest-rate expectations as central bank officials continue to forecast a terminal fed funds rate close to 3.00%, and the greenback stands at risk of facing headwinds over the coming months especially as Chair Janet Yellen and Co. persistently warns ‘market-based measures of inflation compensation remain low; survey-based measures of longer-term inflation expectations are little changed, on balance.’ Nevertheless, a meaningful pickup in household sentiment may keep the FOMC on course to deliver additional rate hikes in 2017 as the central bank anticipates a ‘sustained return to 2 percent inflation.’

Signs of stronger wage growth accompanied by the ongoing improvement in the labor market may generate a positive development, and a marked rebound in household sentiment may spark a bullish reaction in the U.S. dollar as it puts increase pressure on the FOMC to normalize monetary policy sooner rather than later.

Nevertheless, higher costs paired with the slowdown in private-sector lending may drag on consumer confidence, and an unexpected decline in the U. of Michigan survey may drag on the greenback as it casts a weakened outlook for growth and inflation.

Bullish USD Trade: U. of Michigan Confidence Rebounds to 97.0 or Higher 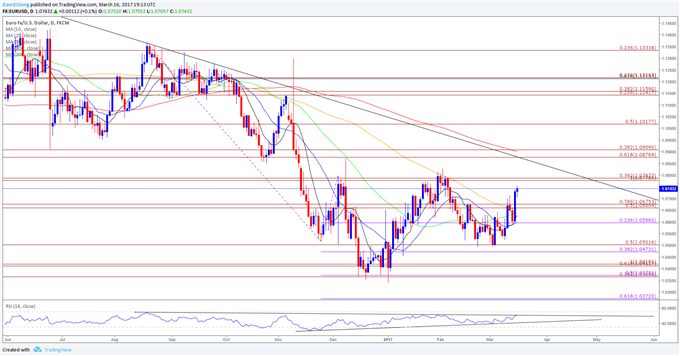 Impact that the U. of Michigan surveyhas had on EUR/USD during the previous release

February 2017 U. of Michigan Confidence

The U. of Michigan Confidence survey narrowed more-than-expected in February, with the figure slipping to 95.7 from 98.5 the month prior. Nevertheless, 12-month inflation expectations picked up for the second straight month, with the gauge advanced to an annualized 2.8% from 2.6% in January, but Fed officials appear to be in no rush to further normalize monetary policy as Chair Janet Yellen warns ‘inflation moved up over the past year, mainly because of the diminishing effects of the earlier declines in energy prices and import prices.’ The greenback struggled to hold its ground following the dismal print, with EUR/USD bouncing back from 1.0619 to end the day at 1.0635.