- Will the Reserve Bank of New Zealand (RBNZ) Continue to Endorse a Wait-and-See Approach in March?

New Zealand’s 4Q Gross Domestic Product (GDP) report may undermine the near-term rebound in the NZD/USD exchange rate as the growth is projected to increase an annualized 3.2% after expanding 3.5% during the three-months through September.

Signs of a slowing economy may prompt the Reserve Bank of New Zealand (RBNZ) to adopt a more cautious tone at the next policy meeting on March 23, and Governor Graeme Wheeler may look to further support the real economy before his departure in September as officials warn ‘numerous uncertainties remain, particularly in respect of the international outlook, and policy may need to adjust accordingly.’ However, the RBNZ appears to be in no rush to adjust the current stance, and the central bank may continue to endorse a wait-and-see approach for monetary policy as ‘inflation is expected to return to the midpoint of the target band gradually, reflecting the strength of the domestic economy.’ In turn, the fresh remarks from Governor Wheeler and Co. may keep the New Zealand dollar afloat should the central bank show a greater willingness to gradually move away from its easing-cycle.

Subdued wage growth paired with the slowdown in household consumption may generate a lackluster GDP report, and a marked slowdown in economic activity may drag on the kiwi-dollar exchange rate as it encourages speculation for additional monetary support.

Nevertheless, the improvement in the terms of trade accompanied by the ongoing expansion in private-sector lending may spur a better-than-expected GDP print, and an unexpected pickup in economic activity may trigger a bullish reaction in the New Zealand dollar as it boosts interest-rate expectations. 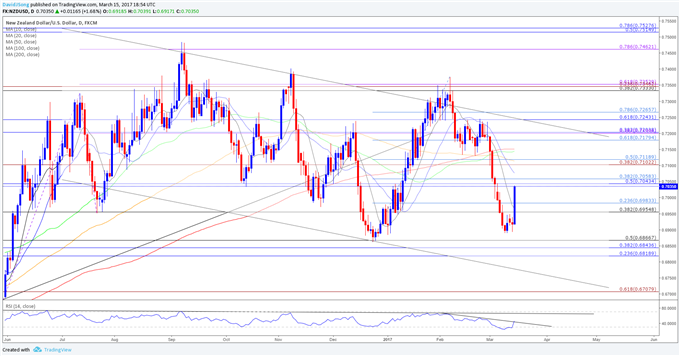 New Zealand grew an annualized 3.5% during the three-months through September, while the 2Q reading was adjusted reflect a 3.4% rate of growth versus an initial print of 3.6%. The expansion was largely led by a 2.1% pickup in building activity, with private-sector consumption also climbing 1.6%, while farm outputs narrowed 1.6% during the same period. The series of mixed data prints sparked a lackluster reaction, with NZD/USD largely consolidating throughout the day as the pair closed at 0.6903.