- Will Majority of Fed Officials Highlight a Shallow Path for Fed Funds?

The Federal Open Market Committee (FOMC) meeting may heighten the appeal of the greenback as the central bank is widely expected to deliver a 25bp rate-hike in March, but the updated projections may generate a knee-jerk reaction should Chair Janet Yellen and Co. increased their efforts to tame interest-rate expectations.

Comments endorsing a June rate-hike should generate a bullish reaction in the U.S. dollar as some Fed officials see scope for three or four rate-hikes in 2017. However, the majority may continue to highlight a shallow path for the fed funds rate as Chair Yellen argues ‘inflation moved up over the past year, mainly because of the diminishing effects of the earlier declines in energy prices and import prices.’ In turn, the FOMC may continue to warn ‘market-based measures of inflation compensation remain low; most survey-based measures of longer-term inflation expectations are little changed, on balance,’ and the dollar may struggle to hold its ground should the committee adopt a more neutral tone and attempt to buy time.

Signs of stronger wage growth accompanied by the pickup in household spending may keep the FOMC on course to further normalize monetary policy over the coming months, and the dollar may stage a near-term rally should the fresh batch of central bank forecasts boost interest-rate expectations.

However, the recent decline in household sentiment paired with the ongoing weakness in core price growth may push central bank officials to adopt a cautious outlook for the U.S. economy, and the greenback may struggle to hold its ground should the central bank largely endorse a wait-and-see approach for monetary policy.

For More Updates, Join DailyFX Currency Analyst David Song for a Preview on the FOMC Meeting! 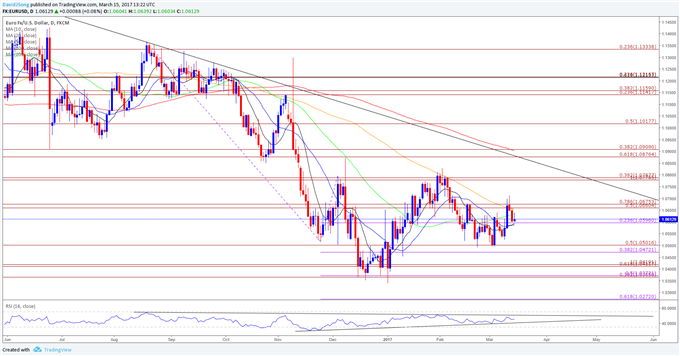 The Federal Open Market Committee (FOMC) kept the benchmark interest rate with the current target range of 0.50% to 0.75%, with the central bank striking a rather balanced tone as officials note the ‘near-term risks to the economic outlook appear roughly balanced.’ Even though Chair Yellen and Co. appear to be on course to further normalize monetary policy in 2017, the central bank appears to be in no rush to remove the highly accommodative policy stance as ‘market-based measures of inflation compensation remain low; most survey-based measures of longer-term inflation expectations are little changed, on balance.’ The U.S. dollar struggled to hold its ground as the FOMC reverted back to its wait-and-see approach, with EUR/USD snapping back from 1.0729 to end the day at 1.0768.